My Grandma Marilynn recommended that we start a guestbook for our boat. Great idea!  Here's a shot at it.


So here it is, on our blog, for everyone to see. Come visit us and get your name & story added to our book.  I'm also adding people we've met along the way and their boat's name.

Eagle, trawler - Bruce & Cindy - we met this couple at Double Breasted Cay, Abacos.  They took us out snorkeling with them to the outside barrier reef.  Mike had a hayday spearfishing. He speared 2 hogfish, 1 strawberry grouper, 1 margate, 1 schoolmaster, and 1 mutton snapper.  Quite the day!  We ran out of propane our second to last day in the Bahamas & they kindly loaned us their spare, so we could eat! 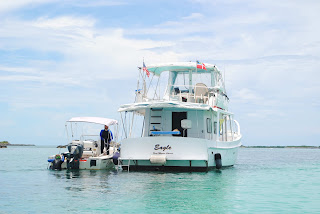 Johnny Wasabi, motor catamaran - Jeff & Cindy - we met this family at Carter Cay.  They had a 2 & 4 year old aboard!  Jeff stopped by and invited us to go out snorkeling with him the following afternoon at slack tide.  We had a great time and Mike speared 2 nice size Nassau groupers. 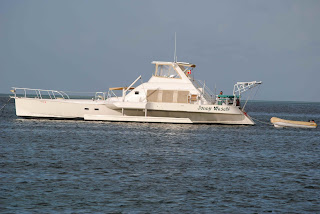 Silhouette, ketch -  We met this couple outside Fox Town, Abacos.  They were on a 3 week vacation, but had done a similar trip as we did 10 years ago through the Bahamas.  Great couple with lots of insight.  His dad built steel boats. 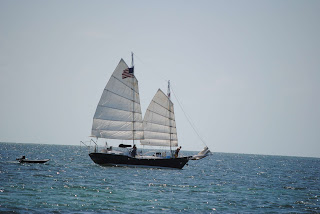 Frigate, Sportfishing boat - Gary, Scott, Scotty & Brian.  We met these four at Moraine Cay.  They were anchored right behind us and Mike & I decided to float down in our pool tubes for a visit.  We arrived just in time for Happy Hour and dinner!  Hamburgers!!


Kopy Kat, PDQ 36 - This dynamic group of four Ken, Diana, Jeff & Katharine, travel to the Abacos every summer.  We met them at Manjack Cay, waiting out the named storm Debbi.  These guys were a lot of fun and showed us some of the best spots in the Abacos (Moraine Cay).  We also shared some great dinners with the group aboard Kopy Kat.  On our crossing home, we chose the Fort Pierce inlet, where they are all from, due to this fun bunch (Note: now docked at their house in Fort Pierce).
Tyler Brahe - flying into Green Turtle, Abacos.  Tyler has 10 days, including 4th of July, to celebrate with the Tanqueray.  We had some of the best diving experience in the Abacos with Ty.
Nicole & Tommy - visitors aboard the Tanqueray.  We picked Nicole & Tommy up in Georgetown, they spent their first night in the hotel Peace & Plenty, which they enjoyed a bunch.  From their we sailed our way back up to Staniel Cay.  Tommy is an avid fisherman and brought all his gear for bonefishing.  We tried our luck at Pipe Creek, spotting several schools, but unfortunately did not catch one.
Susy,Stacy,Mackenzie - visitors aboard the Tanqueray.  We picked the girls up at Staniel Cay and traveled south to Georgetown with them.
Kevin & Emy - visitors aboard the Tanqueray and on land at Pigeon Cay in Cat Island.  We picked them up in New Bight, Cat Island.  They were our first guests to stay in a house for the first few nights, so we enjoyed hot showers, full kitchen, and yes, LAND!  They also brought us a gift, pool tubes, that have been a hit with the rest of our guests.  We sailed the whole west coast of Cat Island with Kevin & Emy, including out to the reef of Little San Salvador.
Cindy & Matt - visitors aboard the Tanqueray.  We picked them up at Lovely Bay in Acklins Island and in a two weeks timeframe traveled through 5 Bahama islands!  Acklins, Crooked, Rum Cay, Conception, and Cat Island.  It was an amazing time, even though the weather was not at its best, and we were sad to see them leave. 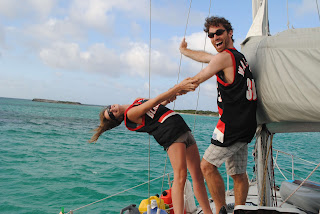 Arcadi - 31 ft. Halsberg Rassey, Beruta -   we met Arcadi on our return visit back to the Bahamas.  He had arrived to Mayaguana the morning after us from Puerto Rico.  He had caught a huge marlin on a hand line during his trip and had his freezer packed.  We sailed together to the west end of Mayaguana and went snorkeling and then had a bbq aboard our boat out of the 2" thick marlin steaks.  Yummy.  We re-met at Rum Cay a few days later when Cindy and Matt were traveling with us and had him over for dinner, cocktails and shark stories.
Stan Carver - Carried Away - Beneteau 432 - met Stan at Abrahams Bay, Mayaguana and then again in Luperon, Dominican Republic a couple weeks later.


Bruce & Jan - Celtic Rover - 41 Morgan - met them in Luperon Harbor.  They were crossing the same day as us from French Cay, Caicos to Luperon, but took a different route across the banks.


Lutes & Krina - Custom built 43 ft. Dutch steel boat, Spray - we met Spray over the VHF prior to leaving French Cay towards the Dominican Republic. They are originally from Norway and have been sailing for 30+years.  Their favorite spot was in Turkey.  Krina is an amazing seamstress and we hired her to fix the holes in our dodger.
Dave & Linda - Freedom 45, Wayward Wind - we met Wayward Wind over the VHF prior to leaving French Cay towards the Dominican Republic.  Our friends on Plane to Sea had been traveling with them previously, so we recognized the name of the boat.  We did not meet face to face until 38 hours later in the DR.  Mike helped them with a project on their mast and was hoisted to the top for 4 hours!  We also went on a fun day trip by land to the big city in the northern DR - Santiago - for provisioning the boat.
Chris - 44 ft. catamaran, At Last - we met Chris and crew on a tour to the north beach in Mayaguana.  They were anchored in Abraham's Bay with us and leaving to Turks and Caicos the next day.  We kept in touch over VHF for most of the way down.
Dr. Bruce Ball - Home on Crooked Island & McGregor 26 with two hobby cat pontoons - We met Bruce at Landrail Point, Crooked Island.  Nappy introduced us and Bruce quickly offered us a room to stay in, laundry, water and showers.  We had a great boat get-away at his beautiful house on Crooked Island.  When not in the Bahamas, Bruce lives in Yakima.
Don & Janice - 10.5 Tanzer, Plane to Sea - met them anchored outside Landrail Point and enjoyed a couple pina coladas aboard their boat.  We made plans to travel south with them for the next month.  They plan to make it to Trinidad for hurricane season.  They are from Texas. We met back up with Don & Janice in Luperon harbor!


Daubie - Visitor for the second time aboard the Tanqueray!  Daubie brought us much needed parts flying into Clarence Town, Long Island in February. We hooked into an enormous sailfish on our way to Crooked Island with him and had some great adventures checking out Samana Island  and from there on to a 135 mile voyage to Cat Island.
Lost Marbles - Kimberly & Bruce, Catamaran


Max & Laura - 40 ft. Trawler, Twilight - met them at Water Cay in the Jumentos and became traveling, snorkeling and cooking buddies.  Spent some time in Georgetown together and then headed to Long Island, Conception Island, Rum Cay and Crooked Island together. 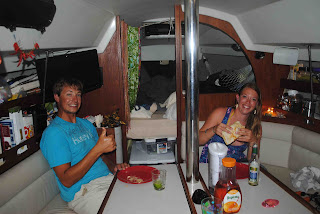 Tony & Ella & Malia - 40 ft. ketch, Ohana - met them at Allan's Cay in the Exuma's and travelled down south with them and reunited in Georgetown.  Ella has her own company making recycled sailing bags and they have a 5 month old baby aboard!


Bruce & Cindy - 42 ft. Beneteau, Aviva - met them in Gun Cay and made the 2 day crossing of the Banks to the Chub Cay in the Berry Islands with them.  They just retired and are traveling for at least 6 months in the Bahamas.  They are from Boulder, CO.

Skip & Carol - 36 ft. Catalina, Rapsody - met them at the Riviera in Fort Lauderdale.  Crossed from No Name Harbor, south of Miami, to Bimini with them.  Have been keeping touch via VHF radio and having fishing competitions!  This is their second year to the Bahamas and they are from Telluride, CO.


Tom & Deb - 26 ft. Columbia, Our Jenny - met them at the dock in the Riviera in Fort Lauderdale.  Tom helped us install our new inverter and battery charger!  Deb is an artist & we're hoping to get a portrait of Nelly sometime!  They are from Pennsylvania and this is their second voyage to the Bahamas on their sailboat, which they boat off e-bay for $350 and then spent 2 years fixing it up!  Our Jenny definitely has more gear aboard than even our boat, amazing.

11.20.11- Mark & Heather Uberauga - First visitors while on our way and overnight guests! That afternoon Mike, Mark and I did some boat work while enjoying an mid-day house drink or two (we installed the cockpit speakers, wired the solar panels and sprayed the dingy outboard with WD-40, thanks Mark for getting the dingy running again and the Octane Boost cleaner!) That evening, Heather and her brother, David, came over and we had a delicious steak BBQ aboard and our fare share of Gin & Tonics! Took a dingy ride into town, to get the local bar tour from Heather & David and then back to the boat.

11.15.11 - Ted & Maggie (Tartan 30, S.V. Sunday's Child) - Dinner and a few too many drinks at Sister's Creek. Next day we made the 40 mile journey to St. Augustine together. An awesome couple also traveling South to the Bahamas on a Tartan 30. They also have a black lab aboard named Chessie! Check out their blog at: www.sundayschildt30.blogspot.com

10.29.11 - Mick, Callie & Liz (Mike's cousin's) - drove us from Asheville, N.C. to our boat in Charleston, S.C. We had a great afternoon with some Sara-mosas (pineapple and champagne) to christen the Tanqueray. That evening, Mick, Callie, Mike and I headed into downtown Charleston to celebrate Halloween!