Monsters of the Deep – A Fishing Tale Continues


Our fishing tale continues as we travel south from Nassau through the Exumas, the Jumentos, to Conception Island, Rum Cay, Long Island, and Crooked Island.  I set out on this trip with a goal to dine on as many lionfish as possible and to cook each recipe out of our ships bible, the lionfish cookbook.  The lionfish is one of the most popular and dangerous tropical reef fish seen in aquariums and out on the reef.  They are non-native to the Caribbean and have been reeking havoc on the reef systems since they were inadvertently introduced in the 1990’s.
Our quest to kill lionfish began at Allans Cay in the Exuma Island chain where we speared and consumed five fish.  When handling the fish you must be always vigilant as the lionfish are part of the scorpion fish family and are one of the most poisonous fish in the sea.  They have 13 venomous spines on their back, two pectoral spines, and three anal spines, all of which are cut off with scissors and set aside prior to filleting.  The fish lived up to their billing and were delicious!  The spines were baked and used as toothpicks.
Our trip down the Exumas and the Jumentos was marked by a shift in fishing methodologies.  Our trolling lures were traded out for spears and our search shifted from pelagic fish to reef fish, lobsters, and conch.  In the Exumas we feasted on grouper, lionfish, conch and lobster.
As weather would dictate, we headed down to the Jumentos and Sara once again tossed the lines out in “Barracuda Country”.  My brother Hans and I grimaced as we thought of the prospect of removing our lures from the toothy mouth of a big Barracuda.  Fifteen minutes later we hear the shout of “Fish on” from Sara who is clutching the pole.  It’s a big one, a barracuda I’m sure.  Sara fights the fish until she’s tired out and passes the pole to Hans.  The fish pops to the surface.  Its not a Barracuda, its another Mutton Snapper, a big one 15 pounds at least.  The Jumentos are an uninhabited outpost for the Bahamian fisherman.  They are the Bahamas fishing grounds.  We came out of the Jumentos with a couple of big lobster, a huge lionfish, a hogsnapper, a couple dozen conch,  and 1-1/2 big Mutton Snapper.  Not bad for five days.  The second Mutton Snapper was caught as we trolled over the banks on our way back to Georgetown.  Sara again cast the lines off into Barracuda country and again she was rewarded with a Mutton Snapper what luck.  Unfortunately, a shark grabbed on while we were bringing the fish in and we had to fight him for dinner.  It was a draw.  We split the fish.
Next up Long Island, the pelagic fishing begins anew.  We left Georgetown early in the morning with little breeze and little hope of catching any fish since a minimum speed of 5 knots is required for effective trolling.  By 9:00 am the breeze has picked up and we are scooting along at 6 knots!! At 10:00 I here the pole zing!  The engine is out of order, the autopilot is turned off, not a good time to be catching fish.  Sara’s at the helm and I grab the pole.  The bad pole.  We come up with a plan, I steer and hold the pole while Sara turns on the auto pilot.  As she disappears, I see a Mahi-Mahi behind us streaking across the water towards the other pole.  “Sara, your going to have another fish in 30 seconds!” I shout.  She arrives on the deck just as the fish arrives at the pole.  Sara reels in the first fish and trades me poles.  I gaff the fish as Sara works on the second one.  Two Mahi-Mahi, 34 and 36 inches.  We arrive at Long Island and go spear fishing with our friends Max and Laura.  I spear a little lobster Max spears a monster.  Time for dinner. 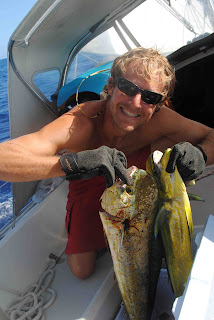 No fishing allowed at Conception Island so Rum Cay is our next stop.  We dive the coral heads.  Staghorn coral raises 15 feet from the sea floor.  It is an amazing playground for diving.  We come away with one large lobster and some great pictures not bad for Sara’s birthday dinner.  Lobster pizza!
Rum Cay to Clarence Town Long Island, a nasty day on the sea with 25 knot winds on the nose.  We are traveling 7 knots and shouldn’t be fishing but how can you resist.  The fish strikes, it’s a big one.  We leave the pole in the pole holder and shorten sail.  I grab the pole and start working her in.  It’s a 42 inch Mahi-Mahi.  The sea is like a washing machine with waves coming from all directions.  We get it in and up on the boat no small feat in this weather.  This fish will be cleaned at anchor.
Clarence Town to Little Harbor, long island.  A short trip, 10 miles.  Three quarters of the way down the fish strikes.  Sara grabs the pole and reels her in.  It’s a Cero, related to a sierra mackerel and delicious.

Long Island to Crooked Island.  We are now in the land of big fish where you need to have the right gear to land them and you need to get them in quick before they end up in a sharks belly.  This is what the captains on the multi-million dollar sport fishers say.  You need thousand dollar reels and matching poles with 80 lb test line.  We will try our luck with our old Salmon poles and reels with 30 lb test.  Not far out of the harbor, the first fish strikes and Daubie grabs the pole.  I announce fish on to our friends on the VHF.  It went deep, must be a tuna.  Daubie fights it and gets it close, it looks like a wahoo, great eating.  When we get it up to the boat we realize the truth it’s a Barracuda, bummer.  I hoist all 40 inches out with the gaff and Daubie pulls the hook.  30 minutes later the reel cries out again it’s a big one and on the bad pole.  I grab the pole and Dad takes the helm.  We stop the boat and I try to work the beast.  Little progress.  There is much speculation on the type of fish, a wahoo, a tuna, it could be anything.  20 minutes into the fight, the fish breaks the surface, it’s a billfish of some sort.  Sara dives below for the video camera.  The fish jumps 7 more times clear out of the water before we get it close to the boat.  It’s buried 20 feet below us and it looks like a whale.  Again the speculation, is it a marlin, a swordfish, can’t be a sailfish it’s too big.  Sara grabs the camera and the Florida Sport Fishing Guide.  I get the fish up to the boat, grab its bill and remove the hook.  It’s a monster, a Sailfish at least 6-1/2 feet.
We release it back into the wild and begin read from the Florida Sport Fishing Guide.  It gives the boat and her crew high esteem, “From a sportfishing standpoint, Billfishes are the true kings of the open sea. They are not only among the fastest of all fishes, but also the most spectacular in the battles they wage against the latest in sophisticated boats and tackle, handled by the most experienced of anglers and crews.”  We were quite proud of our catch.  The Florida record sailfish 116 pounds.  I’m not sure what the Atlantic record holder is but we may have had it up to the boat.  It sure would have been fun to weigh.  I think it was over 120 pounds but we will never know. Still kicking myself for not getting more dimensions.  The sea rewards those who give back.  In another ten minutes we had our replacement fish.  Sara and I were down below when we heard an “Oh Oh!!” coming from the deck.  My dad had seen a Mahi Mahi streaking towards the lure!!  Next thing we hear is the reel running and my dad has abandoned the helm in exchange for the pole.  We rush on deck and give our support.  The fish is up to the boat.  I gaff it and bring her aboard.  A 49 incher.
Trolling at Crooked Island.  We are here to fish.  Jimmy Buffet is here to fish too.  The fishing must be good.  We go out with our friends on their boat Twilight out for a one hour fishing session before heading down to French Wells anchorage.  20 minutes into our foray the first reel runs.  Laura grabs the pole and starts manhandleing her in.  We are sure it’s a tuna at least that’s what we hope.  It’s not.  Another 3 foot Barracuda.  Our time is up and we’ve got to get heading in before we lose our light.  We are still trolling but most of all we are trying to get into our anchorage before nightfall.  We hear the reel run.  It’s the big pole on the upper deck.  Know I’m not the best fisherman.  I know many better, my friends Kevin and Phil, and my co-worker Yale.  But I am enthusiastic when I hear the reel run.  I dashed for the pole nearly knocking Sara overboard and spilling her Dark and Stormy all over her.  I could not recollect I thought I had a clear path.  Max is working on the pole when I get there and the fish is still running.  Luckily for me Max is no longer allowed to reel in fish.  This is his fiancée’s rule.  She fears he may lose another one so I get to grab the pole.  The battle is on.  I move from the upper deck of the trawler to the stern and continue to fight.  The fish is deep.  Its 40 feet down when we first see it.  It’s a monster.  What is it? A whale?  We get it in it’s a Wahoo.  54 inches and over 60 pounds.  This fish gets the royal treatment we bring it aboard and give it a photo shoot that hasn’t been seen since the last Sports Illustrated Swimsuit Edition! 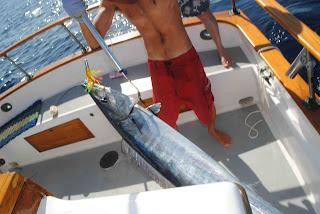 Posted by Sara Daubenberger at 2:09 PM