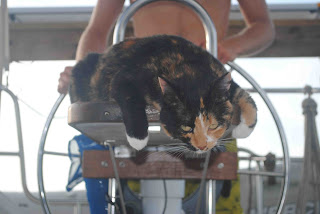 I may have neglected to mention that the month of February was filled with a visit from uncle Hans, due to all the excitement, getting lost, swimming, etc.  Hans and I have a sorted past.  I even lived with him for a couple of weeks while my people enjoyed their honeymoon in Panama.  No cats allowed!

Living with Hans started out great.  I would spend my days outside chasing birds in the woods and hanging with the neighborhood cats.  No rules!  When Hans would return from work, we would relax on the couch and enjoy a few TV episodes before heading off to bed.  The foot of the bed for me.  Life was good.  Shortly into the visit Hans started coughing and pronounced that he was allergic to cats.  I was seldom allowed to touch him and I was certainly not allowed in his room. 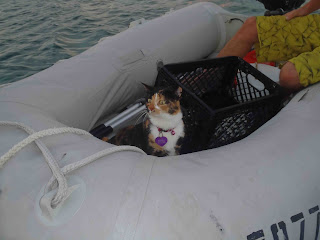 Living on the boat with him is much the same except now he calls me smelly Nelly!!  Smelly Nelly, can you believe it coming from a sailor.  I don’t like to complain, but sailors aren’t exactly zest fully clean.  As for myself, I clean myself daily for 8 hours minimum.  The average Human spends 15 minutes in the shower and wastes 30 gallons of water.  I LICK. 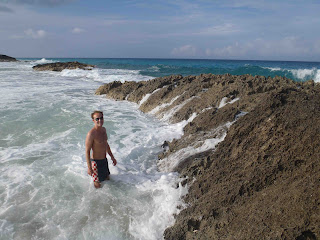 Life with Hans on the boat is not all bad, though.  He plays with me.  Lots!  We play the scarf game.  It’s like redlight, greenlight.  Hans whips the scarf around and I attack.  Then he wraps me up in it and I freeze.  It’s a pretty fun game except when I’m left frozen for extended periods.  Also his room is off limits so it adds to the excitement of the sneaking in and exploring his stuff.  I love to go to the off limit spaces.  It’s been a pretty exciting run having Hans aboard.  I hear the old one is coming to visit next.  I hope he remembers to bring his tube of Neosporin.
Posted by Sara Daubenberger at 11:00 AM