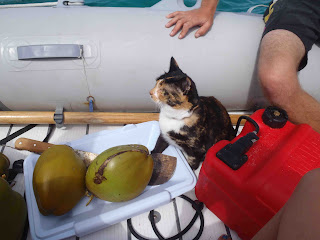 Well folks it appears the rumors were true, the Old One has returned.  Just one week after my fun uncle Hans left, the Old One showed up at our doorstep again.  He was coughing and wheezing and all pale, like death warmed over.  He brought Mom and Dad all kinds of presents and they oohed and aahed over him and fed him some of their nasty fish, but he didn’t bring me anything. 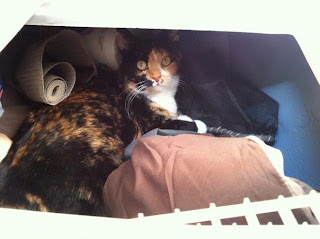 I pouted about that for a couple of days, but he just keeps being nice to me.  So the other night, I was a little bit lonely and couldn’t sleep anyway, when he came out on deck, I let him pet me a ½ dozen times without snapping at him once.  Then we played the dodger game for awhile and it was fun…I was even a little disappointed when he went back to bed.  The next morning before anyone was up I discovered to my dismay that my food dish was empty.  I heard the Old One stirring so I went part way into his room and when I got his attention I went back out and stood by my food bowl.  He is so dense.  I did it about six times and he never got it.  Then Mom got up and fed me and he figured out the system.  Since then he’s been giving me my rations when he notices my bowl is empty.  Perhaps I can train him. 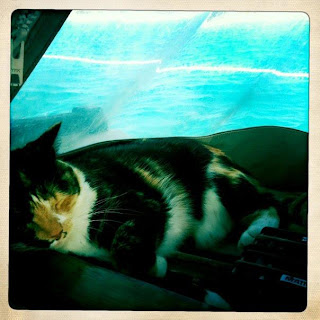 We went on another one of those long passages the other day and my people caught three fish.  One was a real monster, but I’ll let dad tell about that cause he was so excited about it.  To you my loyal fan base that don’t usually waste your time on the people stories, let me recommend Monsters of the Sea and check the fish pictures cause Dad and Mom are really worked up over this fish stuff.  It’s about all they can talk about anymore.
Till next time, this is Nelly, chief feline on board the “Tanqueray”, signing off.
Posted by Sara Daubenberger at 1:00 PM