The Faces of Crooked

After one weeks time, you really get to know the community in a place with a population of 350 people.  Plus we had already spent a week at Landrail Point a few weeks prior and had gotten acquainted with several locals.

Our first day in town on the return trip we went for a jog and ran into our friends Nappy and Trevor, who offered us an island tour and lunch across the island.  We gladly accepted and in return took them for a sunset sail out to the lighthouse and back.  Nappy even offered to pick up Cindy & Matt when they arrive to Crooked.
That evening we ran into a couple and their two children who were vacationing at Landrail Point, Jackie and Brian.  They invited us on a snorkeling excursion for two days out, requiring a change of plans, no longer were we leaving the next day!
Day two, we met our neighbors in the anchorage, Don & Janice, on Plane to Sea, a Lancer 10.5 (34.5 foot sailing vessel).  They were a bundle of energy on their way down to the Dominican Republic.  Over a couple of pina coladas, they renewed our desire to make it to the DR and again we had a change in plans.
Day three, we head out on our spearfishing expedition with Brian and his local friends, Jeffrey, Kim and Elliot.  We come back with a cooler packed of fish, specifically grouper and hogfish, the largest I’ve seen on this trip!  We were in the water for 4 straight hours, needless to say, Mike and I were exhausted.  So, for dinner, we stopped at Gibson’s Restaurant #2 (Willie’s).  We enjoyed a delicious meal of fried chicken on special request, since we’d been eating so much fish and now had a freezer stocked with even more fish.
Day four, we had brunch at Willie’s (a treat from her for all the fish we had brought over last time).  Getting ready to leave town again, we bumped into Nappy and he told us to jump in his car.  He gave us another island tour, this time stopping at some of the homes he built and introducing us to the owners.
Here we met Dr. Bruce Ball.  What an outgoing and amiable character.  Even before introductions, he announced, “You must be in need of water, laundry, hot shower and a place to sleep!”   We were thrilled and said of course!  If things couldn’t get any wilder, he mentioned that he was from Yakima!  (Note: that’s were I grew up and my mom is a nurse and he recognized her name).
Bruce came by the dock to pick us up later that afternoon and we enjoyed cocktails at his beautiful, hand built home overlooking the ocean, while doing the laundry.  Later that evening we were invited to his neighbors, Maury and Fritz’s house, for an ex-pat dinner party.  What a fun night, everyone was so friendly and all from the Northwest.  Fritz also has a book out “Ten Years Behind the Mast” which he wrote after traveling around the world on his sailboat.
Day five, we enjoy a coffee and crepe breakfast with Bruce and then head back to the boat.  Today we are heading out of town, for real this time!  We have exactly a month until Cindy & Matt’s arrival to Crooked Island and have places to get to that require some serious travel time and weather windows.
That afternoon, we sail south and stop at Fish Cay, just south of Long Cay off Crooked Island.  It’s an interesting anchorage, located in a cut between two sandbars. 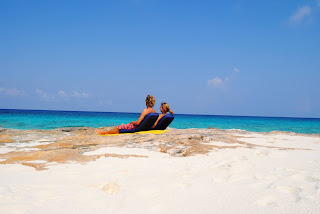 Day six, our friends on Plane to Sea head out for Great Inagua, while we spend another day just 5-miles south at Castle Island.  The beach here ranks in the top 5 and is one of the widest we’ve seen in the Bahamas.  With a beautiful lighthouse protruding from the shrubbery, the rest of the island is deserted.  The anchorage is not desirable on the edge of the ocean with little protection.  We have a night of little sleep, the roll being ever present and punishing.  The next day after untangling the anchor chain, we move to the anchorage just 5-miles north.  We spend the day and evening lounging on land, solid land feels wonderful; it’s difficult to go back to the boat! 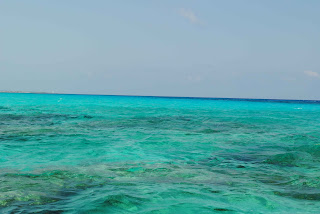 Day seven, time to get moving, looks like the weather is better for a crossing, we decide to head to Mayaguana instead of Great Inagua.  After re-evaluating the charts, it looks like a better direction with the wind and mileage to head from there to Turks and Caicos and then continue on to the Dominican Republic if weather and time permits.
Posted by Sara Daubenberger at 8:00 AM