A Fishing Tale – The Skunk is off the Lures!!

By, Michael Daubenberger
Our tale continues where the last one left off.  Yes, spearfishing in Crooked Island.  The plan was to leave Landrail Point, our anchorage, on Monday.  An invitation later and we were sticking around until Tuesday to go spear fishing with our friend Brian.  The cast included Brian, three local guys Jeffery, Kim, and Elliott, and of course, ourselves.  Tuesday arrived and we headed down south to the reefs off French Wells.  We started diving on the relatively shallow reefs 10 to 15 feet and worked our way out.  It was soon clear that Jeffery and Brian were putting on a spearfishing clinic.  They would work the fish in pairs, and as far as I could tell never missed a target.  The boat filled fast with Nassau Grouper.
Later in the day we were working the reefs in 35 to 40 feet of water, which is about my limit.  From the surface I spotted a Hog Snapper and pointed it out to Sara.  From above it looked small but definitely large enough to shoot at so I drifted down.  As I got closer the fish got bigger, it was a monster 15 pounds at least.  I cocked the spear back and took my shot, a hit.  He started to swim off and I grabbed the spear and headed up.  The only problem was, I wasn’t going up.  At least not fast.  The fish was fighting and so was I.  The surface, 35 feet away in this tug of war.  Progress was made one foot at a time and I was ready for some air.  I slid my hand down to the end of the spear and made my push to the surface.  Just as I was getting ready to give in, I broke the surface.  Again spear fishing success.
At the next reef Sara made her first kill of the day.  A lion fish.  She dove down aimed that spear and whacked him square in the guts.  I headed down after to check out a grouper.  Too small.  I headed up.  Sara was at the surface waiting for the boat to retrieve her catch when the fish wiggled free and started half drifting, half swimming to the bottom.  We were on a collision course.  Sara was on the surface watching, no way to warn me, no time to swim down.  15 feet from the surface I look up and see a lion fish 10 feet above my head drifting down.  I take evasive action and we pass each other in transit.  I’m not sure what it would feel like to have a lion fish stick into your head but I’m sure its not good.
Our catch for the day 14 Nassau Grouper, 2 Hogfish, 1 Tiger Grouper, and 3 Lobster.  The Tiger Grouper was a mistake, my mistake.  Tiger Grouper are a fish that commonly carries ciguatera fish poisoning.  A poisoning that attacks the nervous system.  It is not fatal but also not fun like getting stung by a lionfish.  Just different symptoms that last longer.  The Tiger Grouper became shark bait.  Bait that almost took me in with a shark attached.  My take included 1 Hogfish, 1 Nassau Grouper, 1 Tiger Grouper, and 1 Lobster.
We headed south to the bottom of Acklins Island under a stiff breeze and heavily reefed sail.  Both lures out, orange and green.  It had been so long since we caught a real fish that when it hit we were paralyzed.  Sara was at the helm, I grabbed the pole.  It was a big fish and it was taking all of our line.  We came back to our senses, I tightened the drag and Sara eased the boat into the wind to slow her down from 7 knots to a more manageable 2.5 knots.  The fight was on.
Sara took the pole as I took in the jib, cleaned the cockpit, and collected utensils.  Gaffe, Check, Fillet Knife, Check, Lines clear of the cockpit, check, Camara, Check.  We were ready.  The fish was a leaping big bull Mahi.  It showed no signs of tiring.  Sara did.  It looked as though she might take up barefoot waterskiing at any moment.  She didn’t, but she did hand me the pole.  I was fighting, fighting hard in my speedo I might add.  Not a comfortable outfit for reeling big fish in.  30 minutes later we had the fish at the side of the boat and I had the gaffe in his mouth.  He was a monster, 52 inches and he filled the freezer.  Sorry ice, your gonna have to move.  Warm cocktails tonight.
At Castle Island we decided to take a dip, no spears, the freezer was full.  How quickly your mind can be changed.  I spot a good sized lionfish.  We can’t leave him around, destroying the reef system.  Sara climbs out, grabs the spear and goes after him.  A shot to the head ands its all over.  We toss him in the dinghy, dinner has been decided. 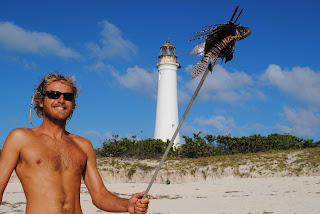 Our trip to Mayaguana was a long one, 75 miles.  The fridge was pretty full but we figured we should try to diversify with a tuna, or a wahoo.  30 minutes into the trip we have our first hit, a 40 + inch Mahi.   I battle as Sara steers.  He leaps and leaps and finally breaks free.  The fridge is full, the battle was fun, its all good.  Another thirty minutes and another hit.  This time a 32 inch Mahi.  Sara battles him on the old pole.  The pole is tired and the reel pops free.  The mount has finally given up.  I put on the gloves and go to work hand-lining him in.  We get him up to the boat and I pull to take him aboard.  No gaffe, he’s a little guy.  No luck either, he gets loose as I pull and swims away.
Next up, the schools of blackfin tuna marked by dive bombing birds (aka tuna birds).  We troll through the first school.  The fish are jumping, but not onto our lure.  We make a second pass and a third.  No luck.  Over the course of the day we see four schools but catch 0 fish.  Night had set and we had forgot to pull in the line and were reminded when we heard it rush out.  Sara commands that I take the pull and I begin the fight.  It feels like a tuna, a small one.   Ten seconds later he’s off and the line is reeled in.  A great day of fighting, but no success getting the fish in the fridge.  Not a common problem on the Tanqueray. 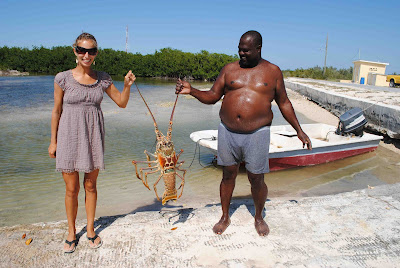 We arrive at the dock with at the same time as a local fishing boat.  A Boston Whaler dinghy, about 16 feet.  We check out their catch and Dalton hoists up a monster lobster that had been piled on about 400 conch.  In Nassau the lobster will go for $100, the pile of conch $400.  We are told it will take 2 hours to clean the conch.  For us, it would take 200.  While in town the locals do some fishing as well.  After our greetings, the conversations would often turn to a questioning of Sara.  Do you have any sisters?  Do they look like you?  When are they coming?  I was flattered.
Posted by Sara Daubenberger at 7:00 AM