Regatta in the Exumas 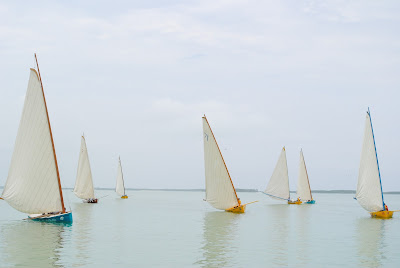 Our trip began in George Town located in the Exuma Island chain in the Bahamas.  After a long series of flights, Tommy and I were happy to finally be in the Bahamas!  We met up with Sara, Mike, Susy, Stacy, and Mackenzie at our hotel, the Peace and Plenty. 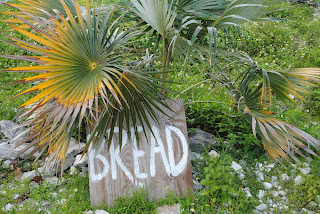 Susy, Stacy, and Mackenzie were on the final leg of their trip, so it was the perfect opportunity to have a joint celebration – a “last night in the Bahamas” for them and a “first night in the Bahamas” for Tommy and I.  Of course, rum punch, pina coladas, and some authentic rake and scrape music/dancing were all a part of the celebration.  Stacy and Mackenzie put the rest of us to shame with their Rake and Scrape skills that they’d learned while in the Bahamas!  It was a fun night capped off with a crazy thunder/lightning storm!

The following day was full of re-provisioning the boat and setting a route.  We were going to be heading north out of George Town towards Staniel Cay where we’d catch our return plane ride to the US 10 days later.  All the while, a tropical depression was brewing out on the water, so our first goal was to find a secluded area that would provide some shelter from the storm and set anchor.  So, with appropriately named “Dark and Stormy” cocktails in hand, we sailed to a small bay a short distance from George Town to take shelter. 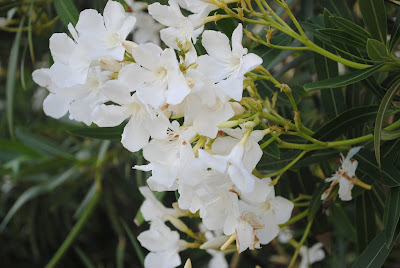 The storm actually did two good things for us.  1) It enabled me to get my “sea legs” … while I did not feel too good the first day or so with all the waves, I think it helped to speed up my acclimationJ.  2) We got to experience one of the craziest thunder and lightning storms I’ve ever encountered!  The lightning came in sheets that illuminated the entire sky and the booming thunder that followed directly after was so loud that at times it hurt my ears! 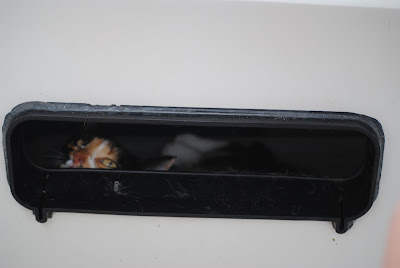 That along with the fact that all of us (including Nellie and the Tanqueray) came out unscathed made my first tropical storm on a boat a pretty cool experience. 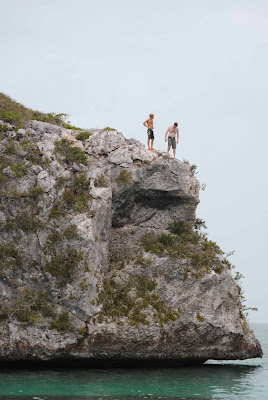 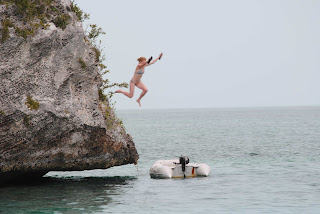 Over the next day and a half, we passed our time exploring beaches between rain showers and playing cribbage (Sara and I dominated Mike and Tommy!), and before we knew it, the conditions improved enough for us to head north!  Our goal was to get to Barreterre on the northern tip of Great Exuma Island by Saturday to attend the annual Regatta. 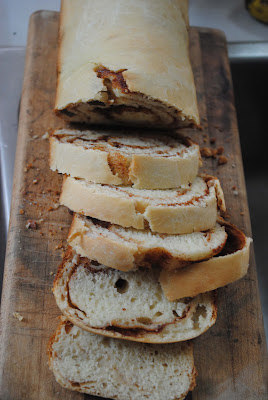 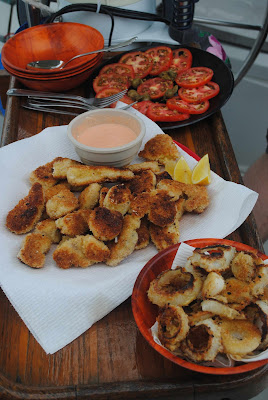 On our sail northward, we filled our time cooking (Sara showing us how to cook up gourmet meals in their galley … including fish fingers, homemade pizza, onion rings, blackened fish, roasted chicken, and fish tacos – delicious!!), swimming/snorkeling, cliff jumping, and, of course, sailing! 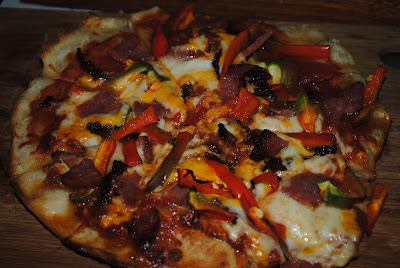 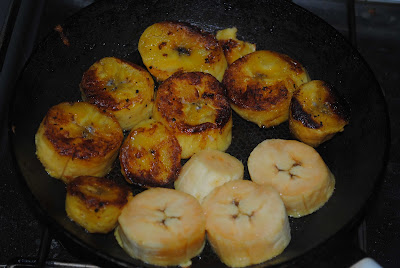 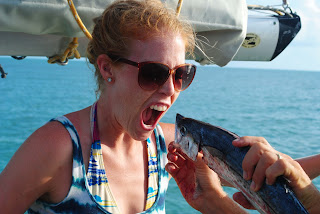 The night before we made our final push into Barreterre, we anchored up a mile or two from the main town.  After another delicious meal and a round or two of cribbage (Sara and I still winning, of course) we retired so that we could get up early the next morning to get into town.  That night, all of us were awoken by the deep bass beat of music that could only be coming from some crazy party for the Regatta. 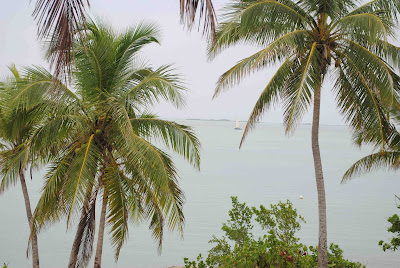 The next morning we all expressed some concern that they may be all partied out due to the fact that the music had gone on into the wee hours of the night.  Never fear.  After anchoring the boat and taking the dingy into shore, we realized that they were already gearing up for round 2 ... several people already having beers in hand as they prepared to watch the races. 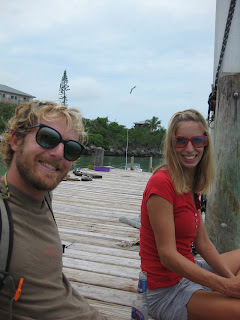 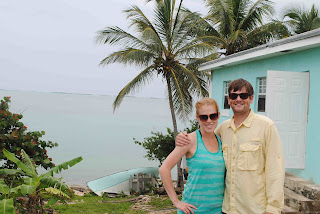 A few things I learned from my first Bahamian Regatta experience: 1) there is delicious Bahamian food served (chicken, fish, peas and rice, corn, mac and cheese, etc), 2) they continually rock the traditional rake and scrape music (which is awesome) at an ear piercing level (which is not so great if you are standing near the speakers), 3) once the locals have had a few beers to loosen them up (read: sober them up from the night before) they love to discuss the races with you, 4) if you are an obvious foreigner/first time attendee, the local news channel will spot you out and ask you for an interview (thus Tommy, Mike, Sara, and I were all interviewedJ). 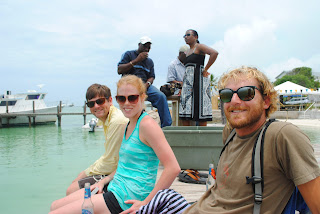 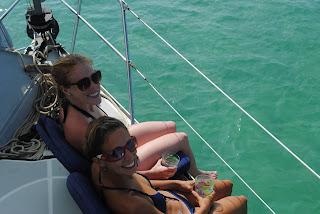 After a fun filled afternoon at the races, we headed back to the Tanqueray to journey further north towards Staniel Cay. 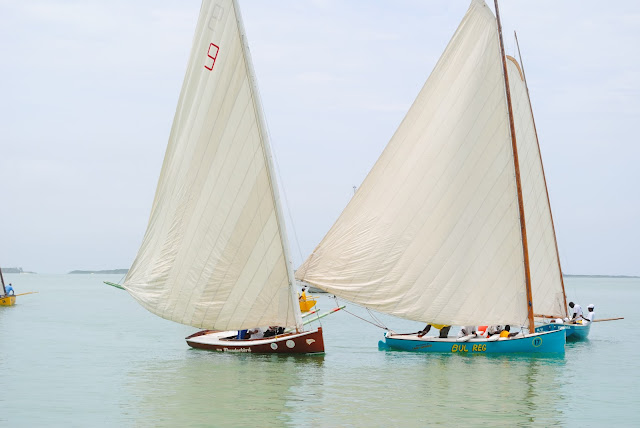 As we ventured further north we filled our days with more snorkeling, beach combing, and a beach fire complete with roasting sausages over the open flames. 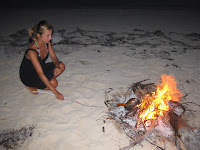 We also stopped into civilization for a bit with a visit to Black Point for laundry, shopping, and a delicious fish sandwich at Lorraine’s Café.   After all the travelling we were happy to arrive at Pipe Creek to spend a few days exploring before heading to Staniel Cay for our flight back. 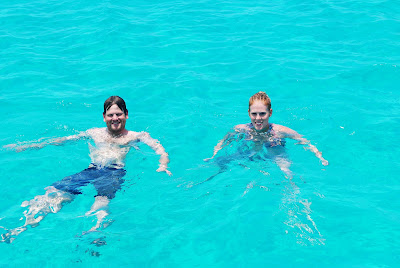 Pipe creek is one of the most gorgeous places I’ve ever been … water in 1000 shades of turquoise encircled by islands and large sand bars that are fully exposed for walking around on when the tide goes out.  It is so tranquil there.  A short time after our arrival, an impressive motor boat sped in at full speed and docked up at one of the islands.  We were immediately intrigued, and it was just our luck that the following day Mike speared his hand (sorry Mike!!) leaving us with a need for a power boat to get him into Staniel Cay for stitches, etc. 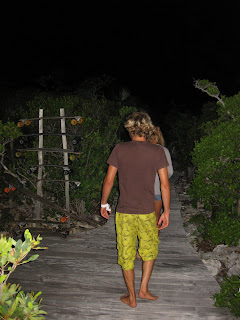 As we approached the island, we were greeted by Hubert aka “Ubi” (as we came to learn) and his thick French accent.  “Hello!  How is the fishing!  Would you like a beer?”  We appreciated his friendliness and his offering of beers, but at the moment we were concerned as to whether or not Mike needed stitches.  Upon realizing Mike may have a serious cut, Humert ushered us onto his island where he provided us with first aid supplies out of his arsenal (and by arsenal, I mean arsenal  … he even had a defibrillator!).   We soon determined that Mike would likely be okay without stitches, so we were able to take Hubert up on his offer of beers and conversation.  He had made the trip down with two friends/employees who were helping him get his island prepped for all the summer activity as well as general maintenance. 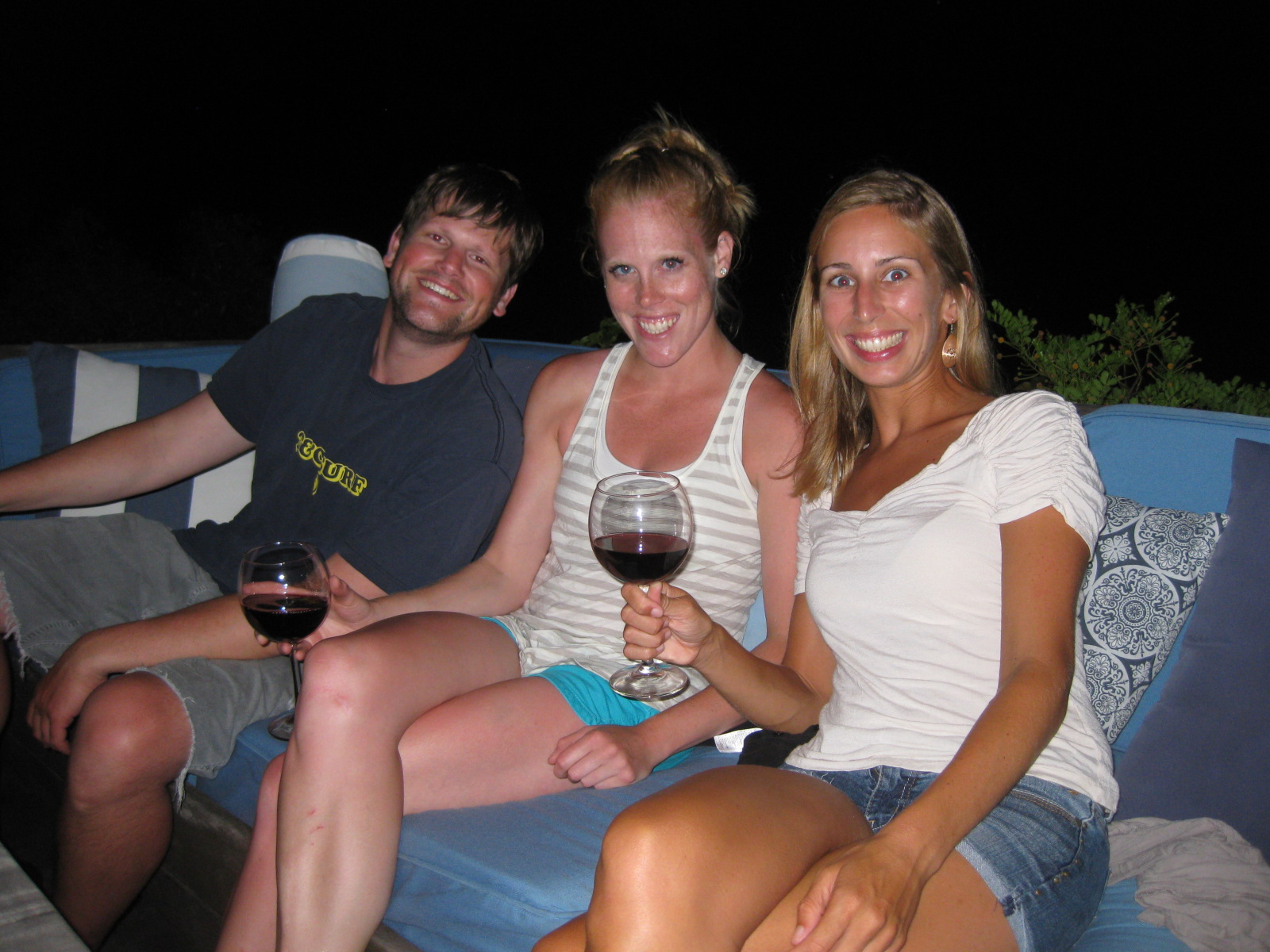 We made plans to return to the island for a cocktail later on that evening once they were done with their work.  The island by night was as, if not more, impressive than it was by day … the extensive boardwalks were all illuminated by candles, and the main deck off of the main bungalow provided spectacular views of Pipe Creek, which was illuminated by a three quarter moon that night.  We had a wonderful evening full of drinks, conversations, and the Spurs vs. Thunder playoff game.  To illustrate how small the world is – it turns out Hubert is friends with Mike’s family’s oldest friends! 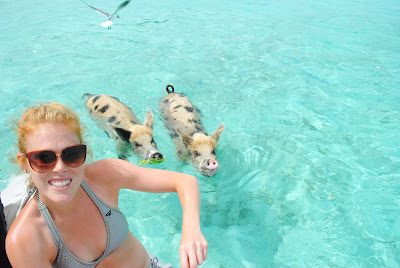 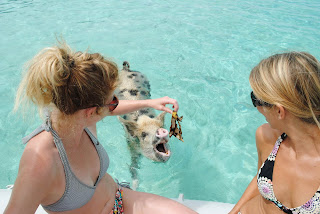 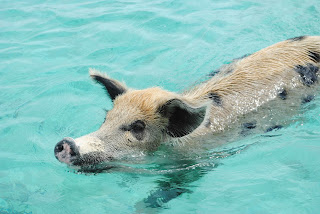 To complete our trip, we had to visit the famous swimming pigs of Big Major and go snorkeling at Thunderball Grotto right outside of Staniel Cay.

Thunderball Grotto provided the best snorkeling of the entire trip and perhaps the best I have ever encountered.  It is not often that you can swim into a sea cave full of tropical fish of all colors and sizes. 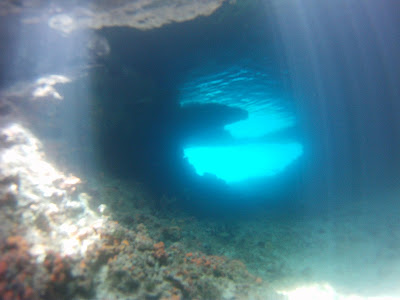 There are some holes at the top of the cave which helps the visibility… amazing!!  We capped off our final night with dinner and drinks at Staniel Cay.  While we were sad to go back to reality in Portland, we will always treasure the many memories from the trip.
A million thank you’s to Mike and Sara for the incredible trip!  We already miss you guys and look forward to seeing you back in the Northwest soon!!

Posted by Sara Daubenberger at 3:52 PM