Pre-honeymoon:  We spent 2 + weeks in Panama for our pre-honeymoon adventure.  Flying into Panama City, which has a skyline like Miami and spent the day touring Casco Viejo, the old section of town.  It was nice to get away after going through a week of wedding mayhem prior to our wedding.  This not only included last minute wedding plans (who would have known that would happen with a year and a half to plan the wedding), but we both had wrapped up our jobs for the year and moved out of our house and rented it.  So we were officially Homeless one week before we tied the knot!

The next day, we flew out of Panama City and into Bocas Del Toro where we spent the remainder of our time.  Bocas is a Caribbean island paradise, where all the houses and restaurants overhang the water on stilts.  We spent the first 4 days on this island and then took a 40 minute boat ride out to Isla Bastamientos to our private overwater eco-bungalow.  This was a picturesque location, but there was not much to do besides relax, swim, read, walk, kayak and get eaten alive by bugs.  After 3 full days on the island we began to go a little stir crazy and had to re-evaluate how we spent our time and slow things down a bit.  After this mental awareness of having no way out and 4 more days to go, we made the best of our time here.  It's hard to explain how you can get stir crazy in such a beautiful place, but it happened!  We even found out the Survivor had been filmed on this very island.  Hmmm, stir crazy in 3 days, what' boat life for a year going to be like??! 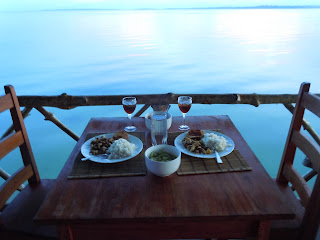 Posted by Sara Daubenberger at 8:17 PM

Email ThisBlogThis!Share to TwitterShare to FacebookShare to Pinterest
Labels: panama