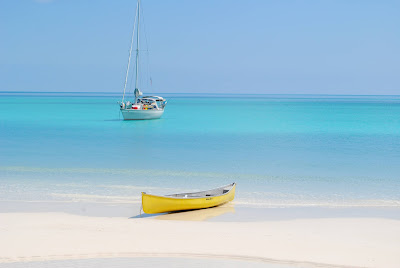 Our journey to the Bahamas actually started back in October with Emy and me getting married.  Our fellow honeymooners, Mike and Sara, were were gracious enough to offer us a chance of a lifetime to spend our honeymoon sailing with them in the Bahamas!  So after a long rainy and cold winter in Seattle we departed in search of warmer weather, clear water, and a little nautical feline companionship.
On arrival Mike and Sara wasted little time in educating us in the Bahamian lifestyle, which included hitchhiking, enjoying cold ones by the sea, and my personal favorite of feeding the sharks the table scraps.  Also on the first night we were lucky to still have Cindy and Matt on board to show us the ropes of boat survival.
The following day the sails were raised and the sail began towards our boathouse retreat on the north end of the island.  Our sailing instructors did their best to show us the finer points of sailing along the way, which Emy picked up much quicker than I.  During the day and throughout the trip Mike kept commenting how the weather and sea conditions were the "best ever".  To us it seemed like any other day in Paradise!
We were welcomed to the boathouse by our soft spoken landlord Leslie.  She simply met us at the beach along with her barking dogs and pointed in the direction of the house; she said “you don’t need a key; nobody locks anything on Cat Island”.  Our high expectations were not disappointed by its accommodations including an outdoor shower, full kitchen, hammock, a nearly deserted sugar sand beach, a view to rival most and a home perfect for our band of travelers.

Our days at the boathouse were spent exploring the coastline by canoe, bike and our personal favorite inflatable pool tubes.  The dining was exceptional thanks to Mike and Sara's expert knowledge in cooking with even limited resources found at the local grocer;  Pizza, sushi, salad, fresh bread, brownies, and all the fish you could ask for. Cat Island would disappoint a traveler looking to be pampered, but we loved its rustic feel and lack of souvenir peddlers.  Even the bar lacked a bartender!  Instead the bars were under the honor system.  We did our best to maintain the system...
One expedition stands out amongst the rest in which we explored the opposite shore of the island.  To make the trek which we believed to be a couple miles one way we used the 3 bikes found in the garage, however, we 4 members in our group.  Without even drawing straws Sara volunteered to make the trek across the island by running alongside us.  This is after doing a very long beach run that morning.  Apparently the Bahamas haven't slowed her down.  Once to the opposite coast beach we found another sugar sand beach with pink confetti, later learning that this was coral that had broken and washed ashore. We snorkeled out to the reef, Mike led the way and after venturing 200 yards off the beach he spotted a SHARK!  Mike is not known for showing fear in any situation, but this time he had a look that made me a bit uneasy.  He instructs us to reverse course and head straight to the beach which means crossing a very shallow reef.  Thankfully nobody endured reef rash or a shark bite.  Sara then laces up the running shoes and completes her triathlon day by running the 3 to 4 miles back. 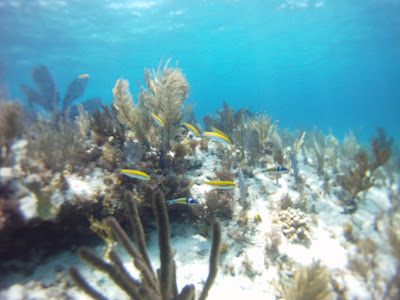 Another expedition with perfectly calm water took us up to Little San Salvador, the island currently known as Half Moon Cay. The snorkeling was great, but no luck fishing. We saw dolphins multiple times, at one point there were 6 swimming along side us, which made up for our lack of catch.

Departing the boathouse was sad as the seas were finally flexing some muscle.  Tonic at this point was motor less so it took Mike and I rowing with the ladies in the water kicking to reach the Tanqueray.  We sailed south to explore the other end of the island.  The seas calmed again and the sailing was pleasant.  The south of Cat Island was the home of the sport fisher’s marina “Hawks Nest”.  We hoped to find refuge for the night here but were greeted with a thick cloud of no-see-ums.  These suckers tormented even after we set sail for the fishing grounds the following day. Hawk’s Nest was also our first interaction with more than two people at a time…apparently this is the place to come if you are hosting a college frat house reunion.


The fishing grounds on the south end of the island were around a sea mount a few miles off shore.  The mount rose nearly vertical from 2800 ft below the seas to around 60 ft below water at its peak.  With the clear water we could see the bottom even at a 60 ft depth!  The tuna schools were easy to spot thanks to our feathered friends and the fact they actually made the sea surface bubble they were so thick.  However, catching one proved difficult even with countless passes of our bait straight through the heart of the tuna schools.  Finally deterred we sailed back to the island and found some snorkeling that ranked as the "best ever" in my book.  Here we had our third up-close shark encounter. Mike expertly speared a good sized grouper with a sniper shot that didn’t even leave drop of blood for Jaws to come after.  On our way back to the Island I picked up the pole and fought a mystery fish for around ten minutes while Mike provided instructions to Sara the helm.  As any good fishing tale ends the monster fish slipped off the hook and was never seen.
The conclusion of the trip included a stay at Fernandez bay, located only a mile or so from our departure airport.  The bay was perfectly calm lined with nice beach bungalows and it even had other boats anchored nearby us.  This was the first time we even saw another sailboat on the entire trip.  This island really was remote.  We packed our bags and we all walked up the road, which is the only road running the length of the island.  We start walking to the airport hoping to hitchhike.  As luck would have it not a single car pass in our direction and suddenly our plane whizzes a mere 30 ft over our heads for landing.  With sweat dripping we hustle to the airport trailer terminal only to be told we are too late to make the flight.  Ten nerve racking minutes later the nice Bahamian airline lady succumbed to our pleas and allows us to board. Just getting our sea legs under us, delaying our departure wasn’t such a bad thought.

The trip of a lifetime is over and we part ways with Mike and Sara.  We THANK YOU again and look forward to seeing you back in the NW!
Posted by Sara Daubenberger at 7:01 AM