A Fishing Tale – Return to the Bahamas 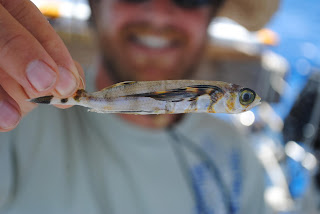 We exited the crystal clear waters of the Bahamas and put away the poles as we entered the Dominican Republic (DR).  Not with one last bit of excitement however.  It was early morning and we were making our last 120 mile push across the Windward Passage to the DR.  Our course had us skirting the banks of the Turks and Caicos as we headed south.  I was at the helm and Sara was manning the lines when the fish struck.  Zing the line went and down goes the pole tip.  It’s a big one.  Sara grabs the pole as I ease the boat into the wind and slow her down from 6.5 knots to a more manageable 3.  Sara fights the fish and gets her up to the boat.  It looks like our biggest Mahi yet.  At least 55 inches head to tail.  I reach down and grab the line right before the leader.  The fish shakes and the line breaks.   What luck after we had already announced dinner for all on the VHF.  Sara is disgusted that I didn’t grab the leader and I am also.

Two weeks in the DR without a line in the water sure seemed like a long time and we were getting the fishing itch long before we left.  The first leg was a long one and a nasty one.  We set out at night in a heavy sea with a stiff breeze and quickly found ourselves rolled into a state of constant queasiness.  It was no time to be fishing and we couldn’t muster the energy to toss out the lines during the whole 20 hour trip.  Not the most heroic return to the seas!!

We arrived in the Turks and Caicos after fishing a 50 mile passage without a single strike.  Time to slip in the water and try some hands on fishing.  Success came quickly when Sara spotted a spanish lobster only minutes after entering the water.  Dinner was ours!!  The spanish lobster looks like a huge cockroach and was known to me growing up as a “Cockaroacha Del Mar” a name coined by my father.  It didn’t taste like a cockroach!! 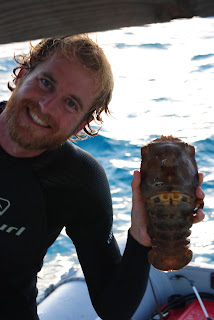 Our next leg of the trip was from Mayaguana to Acklins Island.  Another 70 mile passage and another passage with no success.  The fish were waiting for something and that something came in the form of Matt and Cindy.  Our first trip with our new guests was a short one.  5 miles between Lovely Bay and Attwood Harbor.  The winds were light and our speed slow.  Hardly the best conditions for picking up a nice catch.  I had forgot we were fishing when I saw the line run.  In an instant it was all hands on deck.  Cindy grabbed the pole, I grabbed the wheel, Sara secured the cockpit, and Matt rolled in the jib.  From the looks of it this fish was a fighter and it was going deep.  A good sign as far as we were concerned.  Fish that dive deep are typically wahoo or tuna.  Two of our favorites!  Cindy was battling hard to keep the pole tip up and get the fish in before it got off or a shark got it.  She did it!! Our first keeper blackfin Tuna!! 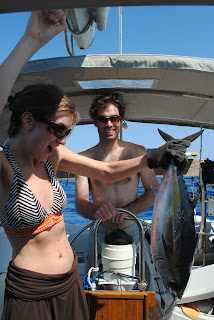 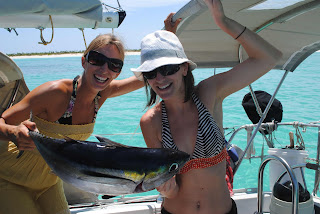 Next up Matt’s tune.  It didn’t take long.  Our next trip was from Attwood harbor to Landrail point.  30 miles.  About 15 miles in the line started running and Matt grabbed it.  We slowed the boat as Matt reeled her in.  This time a 37 inch Mahi.  The perfect compliment to our tuna resting in the fridge!! 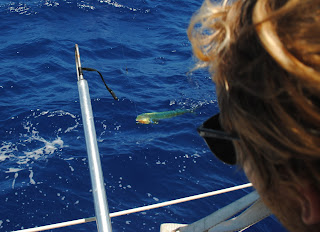 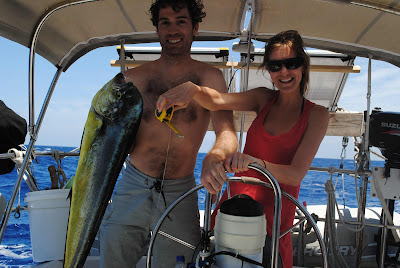 Our trip to landrail was highlighted by another fishing trip with some of the local guys Jeffery, Woody, and Lorenzo.  We headed south to long cay to stir up some grouper.  The weather was bad but the spearfishing was great.  All told we took 5 Hogfish, 2 Yellowfin grouper, and 5 Nassau grouper.  The Carcasses were fed to the sharks.  A great chance to test out our new GoPro. 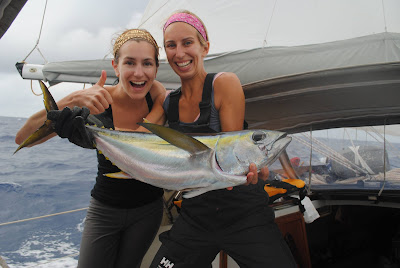 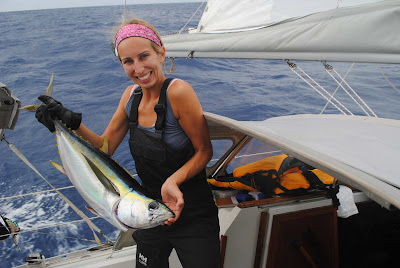 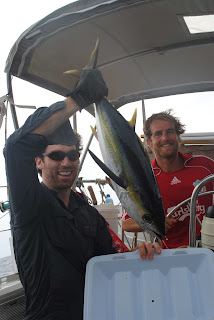 The trip to Rum Cay was another success.  About 14 miles from our destination we hooked into a fighter.  Sara grabbed the pole and I grabbed the helm as Matt and Cindy rolled in the jib.  The fight was on!  Sara worked him in and he worked his way under the boat dragging the pole tip into the water with him.  Time for a tack, and then a jibe to keep him from getting tangled.  Sara got the fish to the boat.  It was a nice Yellowfin Tuna!  The prize jewel of our culinary catch!  We bled him out over the side and attracted the attention of and 8 foot oceanic white tip shark.  Everyone was careful to stay on the boat!

With the fish cleaned, it was time to dispose of the body.  Over the side he went.  Again we attracted a shark.  This time a 10 foot Hammerhead!!  He circled our boat for the next hour.
Posted by Sara Daubenberger at 11:01 AM