A Fishing Tale - Fishing with Company


Much time has passed and many fish have been eaten since we checked in last.  Our story continues at Cat Island with the arrival of Kevin and Emy.  The first of our catch was a hauled in by Kevin as we made our way on a snorkeling excursion to Little San Salvador Island.  It was a good-sized Almaco Jack of excellent food value.  Unfortunately as I grabbed the fish to unhook it, the fish slithered into sea before it could be photographed.  Our next fish struck as we headed down the inside of Cat Island.  It was a fighter, didn’t have as much enough fight to outlast Emy.  When we finally got it to the boat we were disappointed to find it was a three-foot barracuda.  Two fish landed and nothing for the table.
Time to try our luck on the high seas!!  We headed out of the Hawksnest on the south end of Cat Island at 6 am sharp awoken by the buzz and stinging bites of the mosquitoes.  Our minds were on the Tuna we would encounter at the Tartar bank.  Schools were everywhere, but in five hours of trolling under the motor we were able to hook into only one and it quickly broke our 40-pound test line.

Lunch was had at Devils Point along with a snorkel session.  The anchor was down in 30 feet of crystal clear water with coral heads dotting the bottom.  We jumped in and discovered the boat was anchored directly over a nice Nassau Grouper.  During the past week I had been explaining to Kevin the nuances of spear fishing with the Hawaiian sling.  Particularly how the fish swim away after you spear them and you need to chase them and the spear down before they can swim away and/or a shark gobbles them up and takes the spear with him.  Never have I shot a good-sized fish where it just drops down dead.

Well that’s what happened with this one.  I dropped down to the bottom, gave it a shot and rushed in to the catch the fish.  It didn’t flinch; just fell to the ground dead.  A lucky shoot indeed.  On our trip back as we left the reef and entered the deep blue ocean, we hooked into a monster.  Kevin grabbed the pole just in time to keep it from stripping clean.  Sara manned the helm and backed down on her.  I grabbed the camera and ran play by play.  The fight lasted a good fifteen minutes before the beast stripped free.  There was much speculation on the fish type and size, but we were sure it would have been a record catch.

The next day we had not intended to fish, but the wind was blowing just right to send us down to the fishing grounds on a beam reach, so we set off in the morning with a couple of hours to blow.  No sooner had we reached the Tartar Bank than the first fish struck.  A Blackfin Tuna.  Kevin grabbed the pole, braced himself against the roll of the boat and reeled her in.  Sushi for dinner tonight.  Ten minutes later the second fish hit.  This time a small Barracuda. 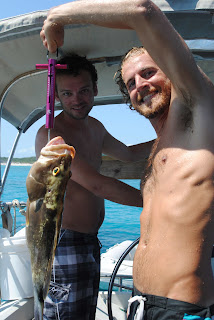 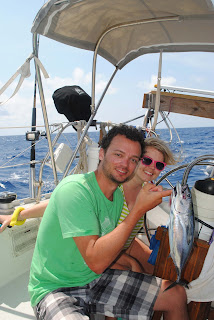 Sara and I said our goodbyes to Kevin and Emy in Cat Island as they barely made it to their flight in time.
We sailed back to the Exumas the following day to pick up the Sundborg girls.  Two of Sara’s sisters and her cousin.  As we left the banks of Cat Island with the sun rising behind us, we hooked into a nice Blackfin, and again as we approached the cut of Staniel Cay we were rewarded with yet another Blackfin.
Fishing with the girls.  We should have known what to expect, seasoned veterans.  Stacy fishes commercially in Alaska need we say more.  Well yes, she caught all the fish for our wedding reception.  Susy may be afraid to touch a fish but she knows how to handle a pole from her many trips to Alaska fishing on her grandparents yacht, the Queen Bee.

Mackenzie is a fishing conundrum.  Her pallet is much like Nelly’s, if it comes from the sea, it’s not meant for the plate, but she loves catching them and feeding the carcasses to the sharks.  What better way to dispose of the body?  With the girls we made two short passages on the ocean-side, but each of the girls received a fishing story out of the trips.  We’ve seen it before and I’m sure we’ll see it again, the “Sundborg Luck”.
The first fish was a lionfish speared by Stacy on her first attempt.  Not bad for a rookie spearfisherwoman.  The second fish was wrangled in by Susy, a Cero.  The fight didn’t last long.  At least not long after we determined it wasn’t sea grass.  I netted the fish and we brought her aboard.

The carcass was dissected and feed to a reef shark and a school of big horse eye jacks.  Hours of excitement.  Stacy hooked into the next Cero and had it up onto the boat and cleaned in a matter of minutes.

On our last leg of the trip as we raced into Georgetown we spotted a flock of turns and a school of tuna.  Actually, Little Tunny.  Our first pass was for naught.  Not even a bite so we turned the ship around.  On the second pass we heard the reel zing.

Mackenzie grabbed the pole and started fighting.  From the onset we could tell it would be a real battle.  The fish was landed and she was a real beauty.  A nice Little Tunny.  Once again sashimi for dinner!!! 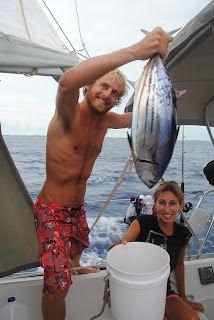 Our tale continues with the arrival of our guests Tommy and Nicole.  Our first fish arrived as we neared the cut to Farmers Cay.  Tommy grabbed the pole and reeled her in.  A Cero Mackerel, similar to a Spanish Mackerel and good eating.  The lines were tossed out in hopes of another.  The next fish struck hard in the shallow waters as we entered the cut and it was likely to be one thing, a Barracuda.  It was and it was a big one, 4 feet at least!  Tommy wrestled it up to the boat and I went to grab the pliers.  I reached for the leader, the fish shook its gnarled head, and away it went taking the lure with it. 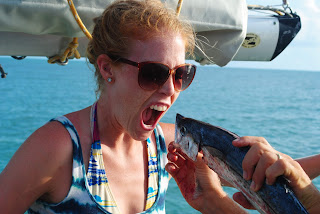 We entered Pipe Creek with the hopes of hooking into some bonefish, spearing a few Grouper, and collecting some conch.  The evening we arrived, Tommy and I went out on the bonefish flats with poor light and lots of wind.  Fortunately, the flats were only 100 feet from the stern of the boat.  Within minutes we spotted a huge school of fish finning.  As we approached, they moved like a wave through the water.  It was something to see!!!  We worked our way to windward and got a couple good casts out in front of the mass of fish, but we had no luck hooking in.
The following day, the four of us went out on a fishing extravaganza.  We were going to hook into bonefish, spear grouper and collect those conch that I had talked about.  We had the poles, the spears, our lunch, and our drinks.  We were ready!!  Heading out the cut we spotted a few sharks, a big stingray, and a school of bonefish.  At the cut, we jumped in for a drift dive looking for our next big catch. 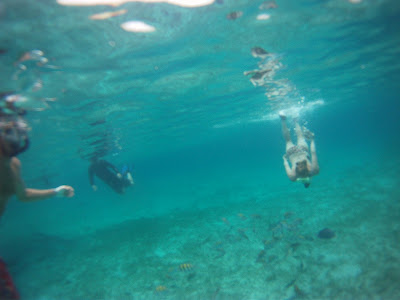 Big it was, a fish it was not!!  I was clearing my goggles and holding my spear in my left hand.  The spear slipped through the handle and the barb lodged itself a ½ inch into webbing between my thumb and pointer finger.  I had hooked into something, myself!!  The big fishing trip was cancelled.  Some medical attention was needed.
Posted by Sara Daubenberger at 7:02 PM