In 1648 a group of 100 settlers from Britain were marooned on a Bahamian Island – Govenors Harbor, Eleuthra – known as the birthplace of the Bahamas.  They were known as the Eleuthrian Adventurers.  Now, 364 years later, the adventurers aboard the Tanqueray, Mike, Sara and Nelly, have arrived at Governors Harbor.
Our journey was hard fought as well, taking two days of sailing a total of 70 miles hard on the wind.   Our first night was spent anchored 3 miles off the coast of Powell Point, Eleuthra, 20 miles from Governors Harbor.  After setting anchor we headed straight for bed, only to be awakened at two in the morning by an unpleasant rolling of the boat.  We had to travel 2 miles closer to land to find settled waters for a comfortable remaining nights sleep. 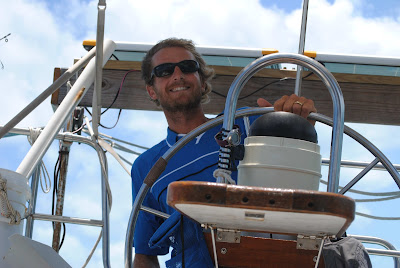 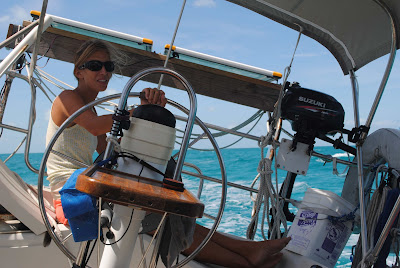 After arriving at Governors Harbor with an escort of dolphins, we quickly hopped into the dingy “Tonic” and set out towards land.  We were amazed with all the produce available at the grocery store and the big Victorian houses in the settlement. 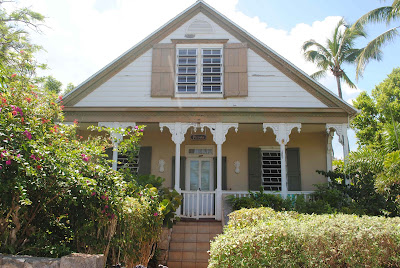 Maybe we’ve been in the Out Islands too long, but this seemed like a BIG town to us!  Even wifi was available at the local library. 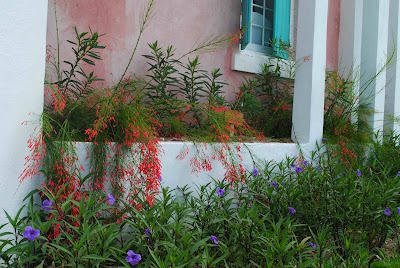 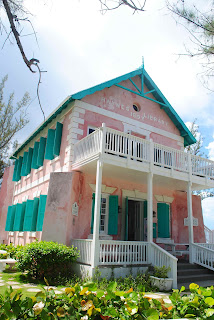 If you can manage to hike the hill in town, you are rewarded with an unbelievable view of the harbor and beautiful pink sand beaches.

We walked the length of the beach and were amazed by the pink hues in the sand, due to the coral and shells ground down by the seas.  The beach was at least 1.5 miles in length – great for running. 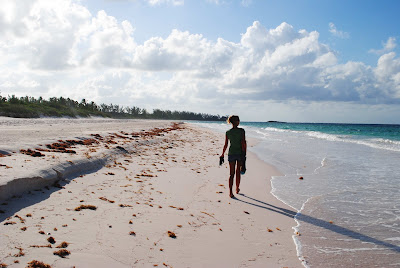 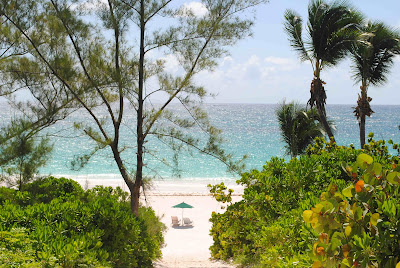 After a couple days in Governors Harbor we set sail northwest towards Hatchet Bay, Gregory Town and the Glass Window.  Our first stop was to be Hatchet bay and the settlement of Alice Town but as we approached, we found a nice breeze at our back and a couple hours of sunlight so we scratched the plan and headed to Gregory Town.  We arrived just as the sun had set and the food made its way down to our bellies.  A great decision!! 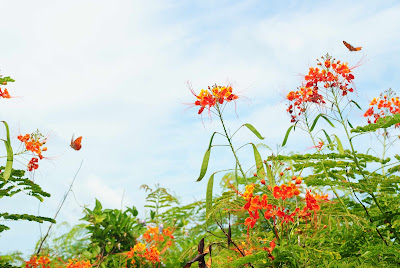 A big day of exploring ahead of us, we headed into Gregory Town to explore the town and to pick up the famous Eleuthera pineapple.  Success was found for each mission and we quickly returned to the boat to continue our voyage.

Before leaving it is customary to take a cooling good luck swim and we were indeed rewarded with good luck.  The anchor was sitting no more than two feet from a huge conch and the stern of the boat rested neatly over another!!!

Onward to the Glass Window!  The glass window is a natural wonder at the north end of Eleuthera.  It is a looking glass that ties the calm turquoise waters of the Bahama banks to the angry deep blue waters of the North Atlantic.  A hundred years ago, there was a sandstone arch tying the north portion of Eleuthera to the south.  This natural arch was destroyed during a hurricane and has been replaced with a bridge.  We were not disappointed by this wonder of nature.  A sight like this is rare to see, and unfortunately, it’s hard to capture the stark contrasts that exist at the Glass Window with anything other than the human eye.
Again, we checked the sky and sew we had a few more hours of daylight.  Onward!!  Onward to current cut, a tiny slit between Eleuthera and Current Island.  Going was slow and the wind shifted constantly.  For long periods we were going 0.0 knots.  At least we weren’t traveling backwards.  We call these swimming breaks.  Ten miles takes four hours and we finally motored the Tanqueray in as day became night. 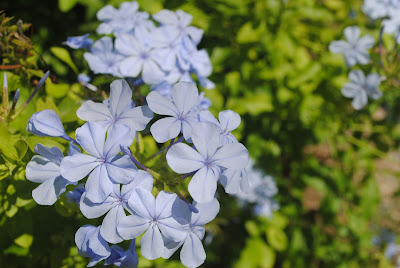 Up early to catch the outgoing tide we motored into current cut and rafted through its jaws.  We were doing 8 knots with 4 knots of current help.  Easy traveling!! Our goal for the day was to reach Spanish Wells and possibly Harbor Island.  Spanish Wells was reached by noon. 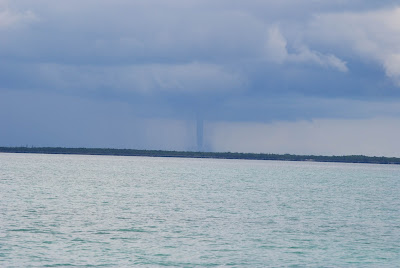 As we arrived our heads turned to the south, and our mouths fell agape.  The sky was filled with a massive dark cloud and from it a huge funnel dipped down to the earth below.  The waterspout is directly over our anchorage from the night before!  Lucky us, it waited 4 hours to arrive.  We watched as the funnel grew and then, as quickly as it appeared, it was gone.  We headed into Spanish Wells. 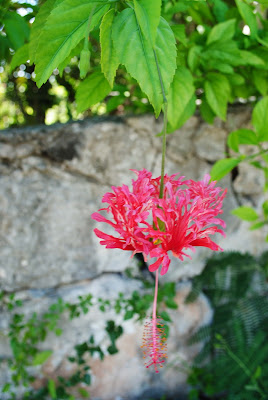 Spanish Wells is a fishing community with a fleet of fishing boats fit for Alaska. This is a big change from the 20 foot Boston Whalers that we are used to.  The town is charming with brightly painted houses and well kept yards and wonderful views of the ocean from all sides.  We searched for an ice cream cone but our search is in vain, maybe we can find one at Harbor Island.
We returned to the boat to take on the Devils Backbone, an intricate series of reefs that must be passed to access Harbor Island.  The trip was spectacular with the sun high above. The reefs, sands, deeps, and shallows were set off in the most unbelievable of colors by the lighting above.  We stopped mid way and snorkeled the reef.  It was full of fish and vibrant with coral.  Dinner was found at the ends of our spears.

Dunmore town, Harbor Island is a picturesque town, even more so than Spanish Wells.  It is a small town by US standards but to us, the settlement of Dunmore Town is a city.  It was abuz with tourists and locals alike. The town has coffee shops, high end restaurants, two Marinas, and well stocked grocery stores.

Our assessment does not ring true with all guests.  Our first night in we were offered a ride on the back of a golf cart with a local.  “Where are you going”, he says.  The truth is we didn’t know so we said into town.  It was obvious that he thought we would be disappointed by the town when he starts in with “Dis is and Island, you’re not in a big city like Nassau or Freeport your not going to find a bunch of bars and nightcubs.”
He’s had to let some people down a time or two you could tell.  For us it was a big city.  You don’t even have to knock on someone’s front door to get them to open the grocery store.

We are slowly being brought back into the world of civilization.  It is a change indeed.  It’s a good thing we have the Abacos before jumping into Miami!!

Posted by Sara Daubenberger at 11:13 AM