Green of the Abacos


We arrived in the Abacos on the evening of June 18th preceeding a rough nearly 60 mile crossing from Harbor Island, Eleuthra.  It took us over 10 hours of sailing hard on the wind.  I threw up once.  Let’s say we were happy to arrive!

Our first stop was Little Harbor on the big island – Great Abaco.  We were not too impressed, very built up, lots of homes, we didn’t bother to go on land.  Instead we ate a pizza dinner and crashed out early. 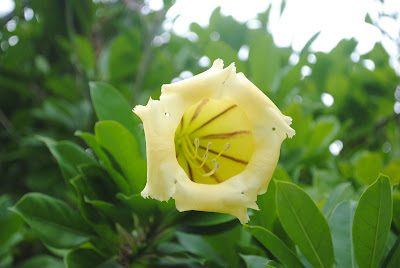 To digress, our first impressions of the Abacos were not the best of impressions: green-murky water, tons of tourists, built up islands, and power boats, power boats, power boats.  Where did all the sailors go?  The change in water clarity was for the worse, but just in the southern part of the Abacos, diving we found to be amazing and clear once you found the right spot and discovered the Barrier Reef, No Name Cay and Moraine Cay.
The waters color was different than much of the Bahamas, but it turns out that green in all its shades create a spectacular view.  The amount of people, tourists and infrastructure on the islands did not seem to continue much north of Green Turtle Cay and there are some amazingly secluded and pristine cay’s along the northwest Abaco chain.
Continuing on with the chain of events, the next morning, we headed north towards Hope Town.  We explored the picturesque town, but found ourselves bumping into tourists left and right.  Too many people for me, maybe I’ve been on a boat too long, but I prefer the remote islands or local settlements compared to the tourist filled towns and/or resorts.   We enjoyed a $9 milkshake and some fried wings in town; picked up a few groceries and then headed back to the boat.
The following day, we set sail, yet again, north towards Guana Cay.  We arrived mid-afternoon and set off for land, to the ocean side beach where we were to locate the acclaimed Nippers Oceanfront Bar and go for a much needed run.  The ocean side beach was outstanding, beautiful pink sand with an amazing view of the ocean.
Nippers didn’t disappoint, with its rainbow painted walls, dilapidated yet inviting waterfall swimming pool, and drinks that knocked you off your feet (aka Nippers); it’s was a time warp straight into the 80’s.  We ordered the Nippers special cocktail made with 4 types of rum and 2 juices - it was a strong one.   We found ourselves lounging by the pool and then making our way back to the boat for dinner.  But after the “Nippers” drink, all we could muster up was spaghetti noodles with parmesan instead of our original dinner plans for sweet potato encrusted mahi mahi accompanied with pasta – that would have to wait until tomorrow – luckily we only ordered one drink at the bar!
The next day, we sailed to the outside of Guana Cay, ready to explore the barrier reef.
Our dingy – Tonic – has not been the most reliable of vessels, so we must go by sailboat if we plan to venture more than half a mile.  The reef was amazing; we spotted tons of Nassau grouper, but unfortunately were in a designated park area, so spearfishing was not permitted.  Times like these are difficult for Mike – he lives and dreams about the next fish he’s going to spear.  After diving for a couple hours we sailed north to No Name Cay. 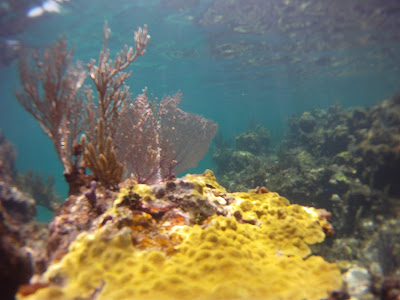 While working out on No Name Cay’s beach, we were shocked when five porky pigs bombarded us.  They seemed friendly enough, but it was time to get moving. We were down to our last gallon of drinking water – you can’t survive long on salt water and rum!
New Plymouth, only 2 miles away from No Name Cay and located on the south end of Green Turtle Cay, was a town more up our ally.  Not as many tourists to speak of; a quaint, well-kept town with a few small convenience stores and several hurricane holes to take your boat, if needed – we are in hurricane season, we must remember.
We met a friendly storeowner that let us fill our water tanks from his cistern. That same night a squall hit us and rained nearly 3 inches in less than hour.  We filled the rest of our water tanks - compared to the alternative of lugging around jerry jugs for water this was sure convienent! 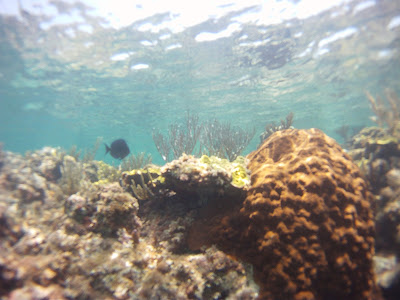 From New Plymouth, we headed back to No Name Cay to discover the spectacular reef and snorkeling.  We spent hours upon hours in the water.  Some of the best snorkeling we have seen in the Bahamas and such easy access to the outside reef.  The Abacos aren’t so bad after all.  We haven’t even hit the best of the Abacos yet! 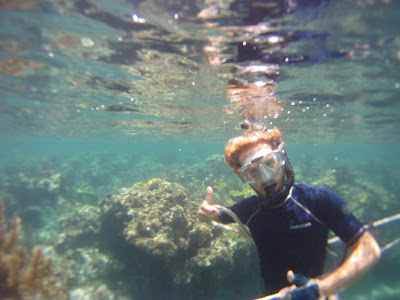 Posted by Sara Daubenberger at 4:31 AM