We set sail at 8am this morning and no longer than an hour into motoring, we stopped the engine, hoisted the sails and sailed 7 hours straight at a clipping 7.0 knot average. You are wondering how fast that is? Well, 1 knot equals 1.14 miles per hour, so that was a good 8 mph. I know that doesn't sound very fast, I mean, I could probably run that, but sailing at that speed on a 32 foot vessel, well, that is moving!

Plus, today is Thanksgiving day and we have not been to a grocery store in over 3 days and we are planning to cook our big meal today! Luckily before we left St. Augustine I had gone on a legendary grocery run (1.5 miles out), running there and trekking the way back with 50 lbs. of groceries that I had to balance between two bags, one which ripped along the way. Thankfully, Mike met me half way and helped carry the bags back, if it weren't for his help I would have had to leave more of the groceries behind, due to weight constraints on my carrying behalf (2 smashed bananas were, unfortunately, left behind).

Being Thanksgiving and all, we thought we would have a short travel day, giving us time to prepare the big meal, but that did not happen. We were on a beam reach! This is the best point of sail for any sailboat and we were not going to stop until dusk, even if it was Thanksgiving! We made a good 60 miles, plus Mike said it was a family tradition to go out sailing on Thanksgiving. So, at around 3pm, I thought it would be prudent to start prepping the food and at least put the turkey in the oven. 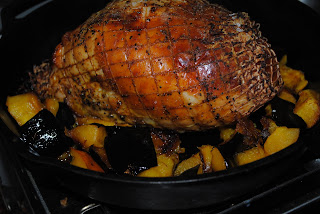 This was my first solo Thanksgiving meal preparation and I was a bit unsure how I was going to get it all together, especially given the fact that I was cooking in a galley (this is the boats kitchen and also means a 3x4 foot area, which leans at least 20 degrees at most times and usually is rocking and rolling, especially when you are trying to prepare food and consists of only one pot and one pan and a handful of miscellaneous kitchen utensils). Thank goodness for the oven gimbal (this is the hinge on the oven that allows you to cook at an angle when the boat is heeled over)! 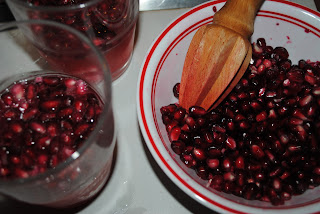 What I made was a baked turkey breast rubbed with salt, pepper and indian curry cooked in our one cast iron pan along with diced acorn squash served with mashed potatoes, using lots of butter and evaporated milk from a can, baked sweet potatoes with butter and brown sugar, sautéed green beans with an olive oil, garlic, apple cider & soy sauce dressing, and bellini's, a pomegranate infused champagne. 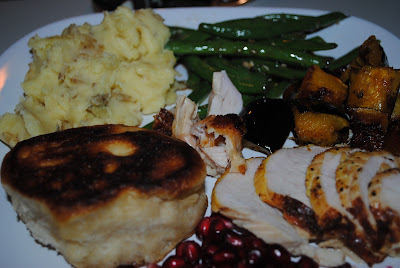 The meal turned out great! Most food on a boat does taste great, even if it's not, it's kind of like camping, where all your food tastes 10 times better, same thing here. So I think it would have tasted great to the real world as well, but it was definitely satisfying to Mike and I. I'll post pictures of it soon. Bon Apetite!
Posted by Sara Daubenberger at 6:20 PM