Giant Iguana’s, white sand beaches and cheap rum – this is the life!  Our first stop in the Exuma Chain was the northern island, Allan Cay.  We had planned to spend ONE night here and check out what the island is famous for - Iguana’s (it is one of the few islands in the Exuma chain to still have iguana’s inhabit the land).
However, island time grabbed ahold of us and suddenly we were into our fifth night at Allan’s.  The days washed away, one blurring into another, while we spent them hanging out with other like-cruisers: snorkeling, fishing, building beach fires, eating conch salad, and spearing lionfish and on and on.  We met two couples both traveling with families and babies.  Ohana, a 45 foot ketch, owned by a fun loving couple, Tony & Ella, with a 5 month old baby aboard!  Sea Schelle, a 52 foot Gulf Star, had a full-time live aboard family, Matt & Erika, with an 8 & 6 year old along with a 3 month old baby, quite the crew, all girls! 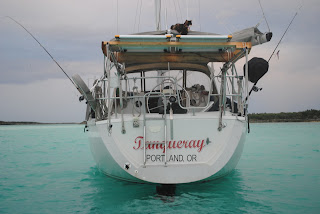 Finally after our sixth night at Allan’s, we woke up at daylight and headed south to Highborn Cay.  Highborn had a pay phone available (not all of the islands have phones, internet or even a store, so this was lucky for us) and a beautiful 3 mile beach that we went for a walk on.  We had planned to phone home and check-in with everyone, especially with Mike’s brother, Hans, who has round-trip ticket to Nassau, but will be taking an island hopper to whichever island we are at when he arrives.  Not all of the islands have airstrips, so we needed to coordinate with him and find out where we should be on the 8th of January to pick him up, so having phone access was key to our secure plans (this was similar to the old days when you didn’t have cell phones and you had to make actual plans with people).

After a few hours at Highborn we continued on south to anchor at Norman’s Cay, we now have 6 days until Hans arrival at Staniel Cay and over 50 miles to go!  Keep in mind that miles in sailboat time take a lot longer to travel than by car.  So far, down the Exuma chain, we have only been traveling 5-10 miles a day, if at all!
At Norman’s we tucked into an anchorage at the south end of the island in anticipation of a strong Northwest wind to strike later that evening.  We set our anchor alarm; this is an alarm that goes off if you deviate from a specified distance from the location of your anchor.  We set the alarm from our Garmin GPS device with a distance of 20 meters.  This is handy to have and relieves some of the stress of dragging anchor at night and not realizing it until it’s too late, but the faults are; it does wake you up several times a night, especially if you set the distance too tight, like we did.  Better save than sorry was our rationale.  The boat does swing as tides change and/or wind shifts, so setting the anchor alarm is a bit of an art and maybe more a science, but it’s better to be woken up with a false alarm than not at all!
At Norman’s that night our anchor held strong in sustained winds of 30-35 knots.  We did wake up several times that night to check on it and opted to not leave the boat the next day because the storm carried through until late that next evening.  So, we spent the whole day watching other boats drag anchor, lounging about, watching movies and of course drinking rum & cokes.  Still not a bad day!
From our cockpit we saw 2 sailboats drag anchor and man does it happen FAST.  Our neighbor, Puffin, popped loose and was heading straight towards us, but luckily their anchor alarm went off and they were able to get the engine started in time and re-anchor.  This was definitely eye-opening to see what happens when your anchor drags or pops loose.  You have to be ready to react quickly because there is not much time before you end up ashore or on another boat.  This is why Mike and I spent the day on the boat checking our GPS every hour to make sure we were not dragging or that others were not going to drag into us!
The following day the winds had died down, so we continued further south to Shroud Cay.  This island is part of the 30 miles of the Land and Sea Park in the Exumas.  The park is protected, so fishing and taking anything from the park is prohibited.  Luckily we still have lots of frozen meats and pastas, rice and beans from earlier provisioning, but it will be nice to get back to fishing soon!  Shroud Cay is known for it’s expansive mangrove forests with shallow waterways cutting through the island, allowing you to dingy across to the east side.  It has beautiful beaches, lots of conch, and amazing mangroves.
Two and a half days until Hans' arrival, time to continue south and FAST!  We leave Shroud Cay under sail and head to Warderick Wells, 15 miles away at a clipping 1.5 -3.5 knots.  We’re going to have a long day of sailing – no problem – the sun is out, we have the time and we still have cold beer in the fridge!
We arrive outside the entrance to Warderick Wells as the sun is setting and although our plan was to be carbon neutral for the day (using no fuel whatsoever), we turn the engine on for 40 minutes to motor in before dark, maneuver through the proper channel and charge the batteries.  There are miles of trails here, which I plan to run in the morning and the snorkeling is suppose to be great, plus the weather keeps getting warmer since our last front.  In the evening, we see 16” Jacks swimming through the water off the transom.  Diving is going to be good!
Posted by Sara Daubenberger at 7:10 AM