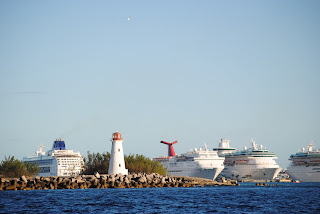 We arrived in Nassau, the capital of the Bahamas, on Christmas Eve.    We were the last ones to arrive at the dock (out of the half dozen or so other crossers that we traveled with from Chub Cay) and I’m not sure what to blame our slowness on particularly.  It may have been due to us deciding to sail with the engine off for at least half of the crossing with fluky shifting winds, while others motor sailed.  Or it could have been because we were delayed by an hour by our BIG CATCH of the day, a giant mahi-mahi that we caught mid-day and we spent almost an hour reeling in under sail, while our boat was spinning circles around the fish. Either way, we arrived last at the dock, much to our racing dismay, but we did arrive prepared to feed the whole fleet a delicious Christmas Eve dinner of the freshest, tastiest mahi-mahi. 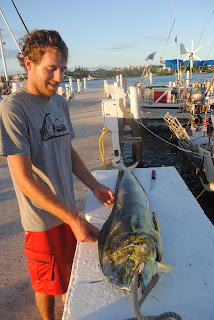 Everyone brought out the chairs and tables to the dock as Mike filleted the fish in minutes.  The other men watched in awe and attempted to put in their two senses on how it should be done, while Mike, to all the men’s envy, was already finished with the task!  Yep, that’s my husband!  He can catch, identify and fillet a fish better than any man or woman out there, except maybe, my sister Stacy.
We feasted that night, as the other sailors brought: rice, salad, cole slaw, beverages and the like.  Mahi-Mahi is definitely one of the better tasting fish and I’d have to say it’s my favorite so far. 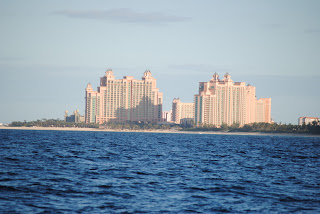 The next day in Nassau was Christmas day and Mike and I had planned to Skype with our families and then join in on the potluck turkey dinner at the dock.  After which we were to head out to the Atlantis Hotel and finish out the night heading to the Junkanoo festival (which doesn’t get started until 1 in the morning!).  Since we arrived after dusk, we did not have to purchase tickets to the aquariums at the Atlantis and it was actually a lot more fun and eerie seeing the sharks swim above you in the aquarium at night!  Dancing with the stars above as we meandered through the underwater tunnel.  We went over with our friends Tom and Deb and it was a difficult task staying awake until 1 am until we walked down Bay Street for Junkanoo.  A spectacular parade of men and women in elaborate, colorful, feathery costumes dancing down the streets with full marching bands in full dress following.  What a sight!!! 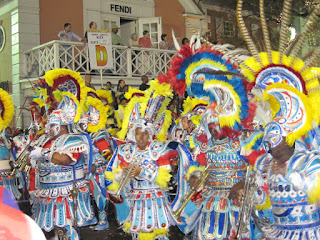 By 2:30 am the festivities were just warming up and crowds were growing ever bigger.  We unfortunately, could not stay awake much longer and headed back to the boat by 3 am to crash out.  A cruisers life is defined by early mornings and even earlier nights.  At least ours is.  Tomorrow was Boxing Day another Bohemian holiday and all the shops would be closed and people resting from the night of festivities.  We arrived in Nassau at the right time and couldn't have had more fun.  An amazing Christmas treat!!  Thank you Nassau now its on to the deserted islands of the Exumas!!! 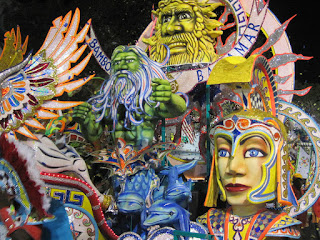 Posted by Sara Daubenberger at 8:31 AM