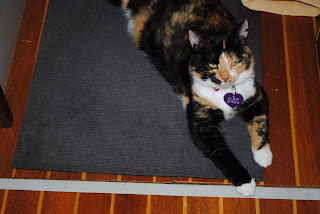 These people are just not that easy to train. How many times do you think I'll have to crap on their bed before they learn to provide me full access to a clean litter box? I mean really how hard is it. They thought I would be satisfied to poop on a screen poised above the litter and I have to say I tried the arrangement and found it completely unsatisfactory. Then it got really stormy and the door to the room they call a "head", what's that all about, and locked me out of the litter box again. When a girls got the runs she needs access. Well, I jumped up into the forepeak, but before I could bury the evidence in that damn quilt I got busted. Everybody threw a fit of course, and I had to have a time out outside which was just fine with Me. So now we're stuck out in the anchorage with howling norther making waves against the current. It's a little rough this morning. I had to pee really bad and I let them know. I also refused to use that screen contraption they're so fond of. Finally they took it out and hallalooya, put my box out in the cockpit. Finally I'm getting them trained a little.

Rumor has it that the old gieser is leaving tomorrow. Well there's some good news. I'll have Mom & Dad all to myself. I vever trusted that old guy he was too weird. He was always giving my parents advise about cat related things. I think he's the one that suggested putting the screen in my litter box. Hell that's the only dirt on the whole damn boat and they cover it up with a screen just to make their lives a little easier. Well, I showed them, I turned their whole bedroom into a litter box.

It's a constant battle training these humans. First I become little miss b*@!*, then when they do what I want, I cozy up to them and purr a little. They'll get it eventually, just a little more training. It's exhausting work, but what else do I have to do, I'm a cat.
Posted by Sara Daubenberger at 5:36 PM