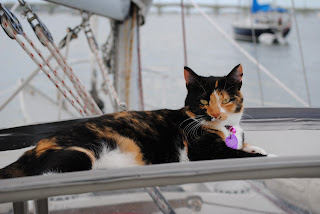 I need to go back and straighten out a little detail that I'm quite sure will be misinterpreted if others tell the tail. My people have been putting a lid on my "box" when they don't think I'll be needing it. If they're put off by it...just think how I feel. Anyway, the other night Mike put it in their "poopy bathroom" and closed the door, then he went to bed. The old guy, to his credit, suggested I might need to use it, but Mike said no problem, I could hold it for 12 hours.

Well, about 3am I had to go, I mean bad, so I went up forward and tried to wake my people. NOTHING. I pawed at Sara, I was getting frantic, finally I couldn't hold it any longer. While I was burying it in her blanket she woke up and told Mike I needed the "litter box". (Too late babe). He got up and set it up but the deed was done, or should I say the "peed" was done.

So they threw all thier bedding in the "cock pit" (still haven't seen that rooster) and moved into the bunk in the salon.

The old guy woke up an hour later, guess he had to pee too, and gave them one of his blankets, and that's why I got shore leave, cause they needed to do laundry.

Part 4
Okay, I've had it now!! Just when I was getting the hang of it and starting to feel ok about the the whole motor thing and the no land thing and the litter box that moves around and gets a lid on it half the time, just as I was beginning to get comfortable. They get up this morning, almost before daylight, clammer around banging about making all kinds of racket, start that infernal machine, which I have to tell you every damn time it starts I have to take a serious shit, and off we go again!

When I look out, I see that those other boats are all going down the channel we were in yesterday, but my people are going the other way. I try to point this out but they just laugh like they always do...isn't Nelly amusing. How condescending, and all the while the Idiots are going the wrong way.

Suddenly, the boat is moving very strangely. It's trying to fly, I think, and there's no land in front of us. This is not funny!! An hour later I can't see land anywhere, the lid is on my box cause, I took a big dump...and frankly I'm a little nervous. I think I'll eat something. I want to lay down but everything is moving. I have had it with this program. I should have stayed at home with Susy, she understands me.
Posted by Sara Daubenberger at 9:00 AM