Written by, Mike Daubenberger
Ah, the fish tale.  I will start by saying I’m not much of a fisherman.  My patience is lacking.  I like to fish but the fish don’t typically like my lure.  Just like the ladies most of my life.  Well, now I have my good luck charm.   Sara, of course, and as we move deeper into the Bahamas, the tale continues to grow and the space in the refrigerator continues to shrink. 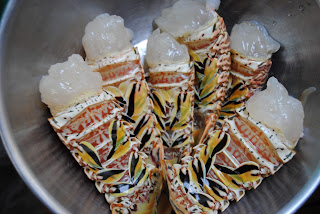 During the crossing to the Bahamas from Miami, we lost two Wahoos.  Goliath's, I will add.  One took all of our line and the lure.  We also landed black fin tuna and returned it to the sea.  Little did we know we were just honing our skills.  Next is was time to try our luck spear fishing; 12 lobster and a queen trigger fish in two outings.   Not bad!!!

Later we fished the banks as we crossed over to the Berry Islands.  Approximately 70 miles.  Now, fishing on the banks can be a risky proposition.  This is because the typical fish caught on the banks is the Barracuda.  Some of our readers may know the Barracuda from the Portland club the Barracuda and it’s about like that if you catch one you better let it go.  For those of you of you that don’t know the club, the Barracuda is a strong, extremely sharp fish carrying disease.  Yes disease, ciguatera fish poisoning.  It attacks the nervous system.  On to the fishing.  The first fish we caught was slightly bigger than our lure.  An 8 inch Jack.  Excellent eating but hardly worth the effort.  Our next fish was a small Cero.  Similar to a Sierra Mackerel but better eating.  We kept this one.
On day two of the crossing we struck it big!!!  An 8 pound Mutton Snapper over the banks.  Now that’s a big snapper for over the banks and great eating too!!  What luck!  Snappers of that size normally reside in the depths, not in ten feet of water where we found him.  Time for ceviche!!
Two days fishing on the banks and no Barracuda.  What luck!  We moved into the depths of the sea as we crossed into the tongue of the ocean.  From 12 feet to 2500 feet deep in a quarter mile.  We decided not to fish for a while since I still had a fish to clean and we had fish to eat.  But as we continued, my mouth continued to blab and we had announced fish for ALL when we arrived.  Why not try our luck?  We put the lure back in.  A purple jig with a hunk of snapper.  Delicious!!  Not long after we hear the reel whining! Another fish!!  It leaps.  A huge Wahoo - 38 inches.  We get her aboard and give her a big drink of our finest alcohol.  Shes passed out drunk, then dead.  Time to head in and live up to the expectations of our traveling companions.
The next crossing is our trip to Nassau the capital and largest population center and biggist tourist destination in the Bahamas.  Not sure why so many people would want to visit Nassau out of all the choices in the Bahamas, but they do.  We are here for Junkanoo.   A crazy day on  Christmas night and also Boxing Day full of parade and party, starting at midnight!!  We leave early, 7 am, and start fishing immediately.  Three hours later our fish hits.  We see it jump!  A leaper, a Mahi Mahi!  Great fighters and even better cuisine!  We get her in - 28 inches.  30 minutes later the fish is cleaned and in the fridge.  The lures are back in the water and offers have been made to buy the briquettes.
Another three hours and zing the line goes!!  It’s a big one!! And on the little pole.  The one with the janky reel.  Well, broken reel!  We brought two reels and one pole down from Washington.  Gifts from Sara’s grandparents Dave and Marilynn.  These poles have seen it all in Alaska and beyond and by all accounts appear to be quite lucky.  The pole the fish is hooked on is a salmon pole.  Light for this region and the reel is exhausted from all the fish it’s caught.  It may now be dead, but we are not going to let this fish go.  A huge Mahi Mahi.
We see it jump and twist a hundred yards out.  It is huge and it is beautiful.  The tale fin looks like a shark as it drives through the water.  Sara mans the pole as I hand over hand work the line in.  As the fish gets close, the fight gets more spirited.  I grab the helm as Sara fights the monster.  We are doing complete circles with both sails up and the engine running.  1,2,3,4,5,10,30 circles, the fight is almost done, the fish is close and the gaffe hook is out.  I gaff the fish and Sara runs for the Alcohol.  I have her halfway up the boat and Sara tries to douse her gills with alcohol.  The fish flops, the boat rolls, and the alcohol drops into the water!! Oh no!!  Shes getting off the hook!  I gaffe her again and drag her onto the boat.  Sara runs below for the Bourbon.  We pour a quarter of the bottle down her gills as I try to restrain her and she tries to beat the boat to death.  Victory comes to Mike and Sara.  Tonight we dine on a 54 inch Mahi Mahi along with everyone else at the dock!!  What a Christmas Eve!!
Posted by Sara Daubenberger at 7:30 PM