Thirty knot sustained winds gusting to 40 knots – that’s what we heard on the weather forecast - we needed to find shelter soon.  The out islands do not provide as many options, so we reviewed the charts and decided our best bet was to head north towards Cat Island.  This was a bit of a disappointment at first because we’d be giving up all the ground we had made getting south.  However, we were pleasantly surprised by Cat Island when we arrived. 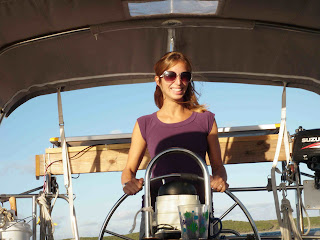 We left Samana Cay at 8:30am on a Saturday, following Twilight out the east entrance, dodging the reefs on both sides and crashing into the 8 foot swells rolling into the cut.  Phew…. We made it out and I dropped the fishing lines in the water.  Time to start fishing!  “ZING, ZING” -  something takes the line and runs with it.  I grab the reel and reel in as best as I can, fighting the fish for a good ten minutes.  I’d like to note that we were sailing over 6 knots through huge waves at the time, still wiping the sweat from our brows after making it through the precarious exit.
Mike and Daubie slowed the boat down and rolled in the jib.  We finally got the thing in.  Was it a mahi mahi, a tuna?  No barracuda.  We tossed it back into the deep and continued on our way.  After that, the rest of the trip was sailed (all 25 hours) without a single bite.  Major bummer, not sure what happened to our fishing MoJo.  We hope to get it back soon
We had a ruff sail getting out of Samana, but by afternoon, we were sailing great and the waves had lightened.  We decided to start 2-hour shifts at the helm starting at 6pm and continuing on through the night.  I was first up – 6 to 8 pm.  I took the helm while Mike and Daubie layed down below to rest up for their first shift.  The sun set close to 6pm, so it felt a lot later than it really was, traveling in the dark.  I was exhausted at 8pm and it was easy to take a nap until my next shift starting at midnight.
By 6am I was on my last shift and the fishing lines were back in the water.  We turned the corner around the south end of Cat Island and anchored at Old Bight for the afternoon and then continued up north for better protection.  We set the anchor right off the town of New Bight and then headed in for a quick stroll and to see if we could grab some food.  Unfortunately, we realized it was Sunday and most places were closed.
In town we met a few locals and everyone was extremely friendly.  The friendliest island yet! If you are walking down the street, cars will pull over and over you a lift to wherever you are heading, even if it’s out of the way for them.
The next day we headed into town and met up with our new friend, Pompey.  He plays the accordion and has a Rake & Scrape band with two younger ladies (the traditional Bahamian music consisting of accordion, drum and saw).  They flew to Nassau a month ago to appear on the Today Show.
He invited us to come watch practice later that afternoon and told Daubie to bring his guitar.  Daubie was in Seventh Heaven, he’s always looking for someone to play with and Mike and I aren’t the most dedicated of musicians or musicians at all!  That evening we sit around the table and listen to the band play.  It was quite the treat to hear local, traditional music and meet everyone. 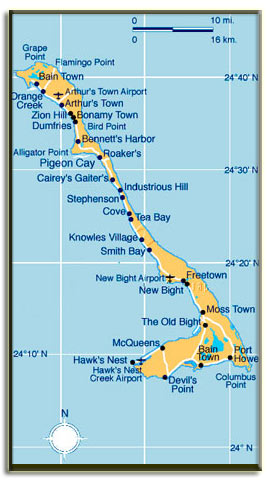 We spent the next day exploring Cat Island and walked around town, hitchhiked and talked with the locals.  We hiked up to the highest point in the Bahamas 206 feet to the Hermitage (The Hermitage was constructed by Father Jerome Hawes who was a Catholic priest and a trained architect.  He lived from 1876 to 1956). 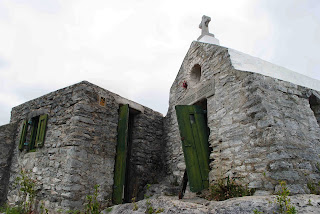 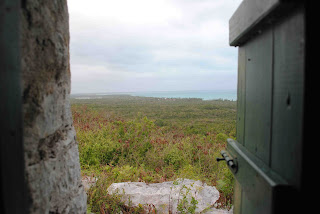 Mike and I waited out the storm on Cat Island, traveling as far north as Pigeon Cay and from there heading south again to Long Island.


Posted by Sara Daubenberger at 7:00 AM