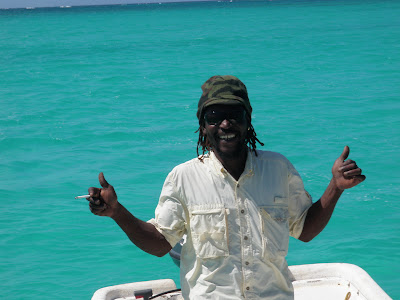 We headed from our anchorage in Atwood Harbor to Chesters Settlement in search of cold beer, Internet, phone service, and possibly some groceries.  The trip in consisted of a 1.5 mile dingy ride in the wind and waves and a 2 mile hike down a dirt road under the scorching sun.  It goes without saying, the cold beer was number one on the list. 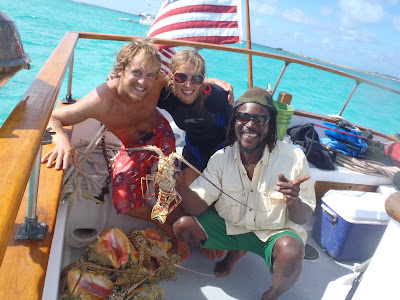 We arrived at Chesters and found it deserted.  As best I could tell, there were only two people living there.  We met the first as we strolled into town.  His responses to our questions were, this is Chesters, the bar is across the street but its closed, and you can keep on walking but you won’t find anything.  As you can guess our questions were where is Chesters, the bar, and is there anywhere to get Internet.  (Note: The settlements on Aklins Island were devastated by hurricane Irene last summer and have not yet fully recovered).  We kept on walking. 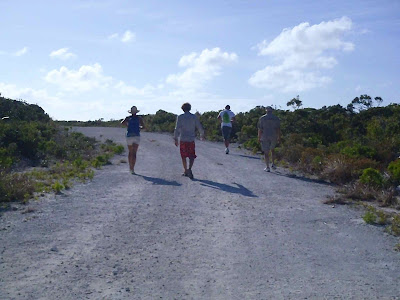 The second person we met was JJ, a Rastafarian Bahamian driving a compact car.  He was not out just cruising the strip.  He had seen us pass by his house so he jumped in the car to give his new guests the royal tour.  We piled in like a snoop dog video.  The crew now included Myself, Sara, my Dad, our friends Max and Laura, and our host JJ.
Down the road we went to the settlement of Lovely Bay with sparks flying off the muffler.  First stop, the bar.  CLOSED.  Next stop, the neighbor across the street to see if she had a stash of beers for their guests.  No luck.  We went down to the boat launch for a few phone calls and finally back to the closed bar.  Here a pair of locals met us and in ten minutes the fill-in bartender arrived to open the doors.
The fill-in bartender was the brother of the bar owner and a construction worker by trade.  Within ten minutes, half of the town was down at the bar having drinks and sharing stories.  It was quite the welcoming.   When we were ready to go JJ drove us back to the harbor and we made plans to meet up at the boat the next morning and tentative plans to give him a ride to Samana Cay 20 miles to the north.
JJ arrived right on schedule through a cloud of spray.  From our vantage point, it looked like his 16 foot Carolina skiff would tip right over backwards as he launched off the waves.  When he pulled up to the boat we asked him about the trip and in typical JJ fashion he responded “ya mon, it’s all good mon”. 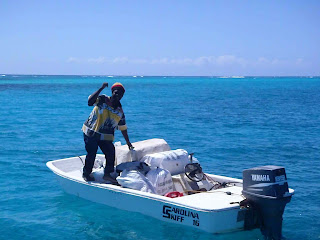 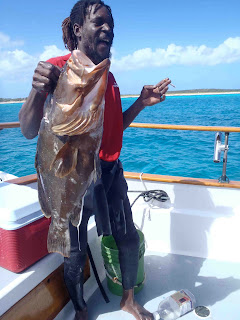 He had a positive response to most questions even when a positive response was not what you were hoping for.  Like when we questioned him if the huge grouper he had shot was big enough that it might be a candidate for ciguatera fish poisoning.  His response with a big grin, “ya mon dats a big grouper mon!”  Our hope was that he didn’t understand the question.  JJ’s enthusiasm extended towards most everything, but particularly to our friends boat, Twilight, a 40-foot trawler and his ride to Samana Cay.   Ya mon, dat’s a nice boat!!  He was delighted with it’s size and potential carrying capacity.  Plans for the trip to Samana were solidified over lunch.  Max and Laura would be taking JJ and towing his boat. 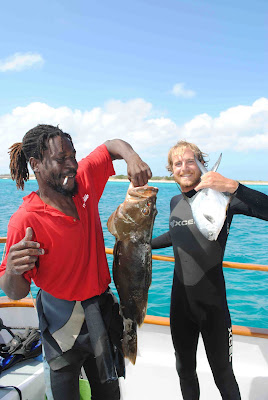 After lunch it was off to collect conch and lobster with JJ as our guide.  First stop conch.  JJ took us to the exact spot we had searched for conch the previous day to no avail.  His response to our ineffectiveness, “you lookin but you ain’t seein”.  He was right!! We got out of the boat in 18 inches of water and JJ would announce there’s a conch right there in front of you.  We collected 24 conch in about ten minutes. 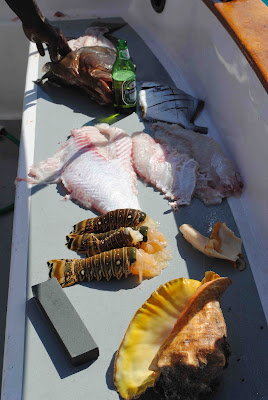 Next up lobster.  The day before we had gone out to the outer reefs in search of lobster and were shut out.  JJ’s response to our futile search, “you lookin where you think they is, not where they is.”  Again he was right.  JJ took us into the harbor, not more than a 100 yards from our boat and pronounced, “jump in and get me two tails out of that hole.”  The hole was in 4 feet of water and we did just that.
The next day we left to Samana Cay.  Max and Laura followed the day after.  (A little background on Samana Cay, the only population is a group of about 10 transient workers that harvest cascarilla bark used in the production of Campari and cosmetics.  There are no stores or establishments.  The harbor entrance is treacherous.  Our cruising guide states “Venturing ashore without local knowledge can be treacherous.  We advise against including Samana as a port-of-call). 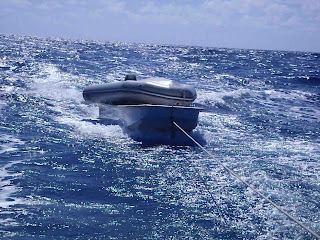 As we sailed north our friends began to grasp the magnitude of their trip carrying supplies.  JJ showed up early with his skiff weighed down under a fridge, a generator, 100 gallons of gas and more.  This was unloaded and JJ announced that he would go back for another load.   Load number two consisted of a couple dozen cases of beer, bags of vegetables, dried goods, and water.  JJ was either bringing provisions for everyone on Samana Cay or to start up a bar and grill.  We are still not sure which. 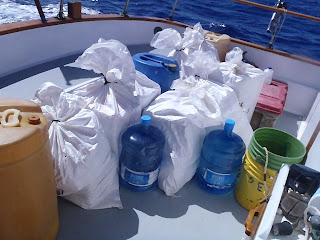 JJ arrived the day of departure with a final load.  All told it was about a ton and a half of supplies.  The trip up was one of the nastiest Twilight (Max and Laura’s boat) had seen with a steep 8 foot beam sea.  Unfazed was JJ who sat up on the flybridge the whole trip smoking as only a Rastafarian can.  As the boat rolled Max was sure he would see the Rastafarian go flying over the side.  Adding to the anxiety was the presence of the US Coast Guard.  Max again was certain that upon seeing an old trawler loaded down with burlap sacks full of goods, a Rastafarian, and two 26 year olds, they wouldn’t even ask questions, they’d just take the boat and lock them up.
JJ’s response to the coast guard, “don’t worry about them mon, if they get you on the radio you tell them not to worry, jus pass on by.”  By the time Max and Laura arrived, they were ready for a drink.  JJ packed up his supplies and took them ashore.  Our friends took a sigh of relief.  The trip payed big dividends and we were treated like family on the island.
Posted by Sara Daubenberger at 9:00 AM