Back to Crooked Island that is.  Some of you who know sailing and the islands, may have wondered why we had ventured off north so early!  We traveled 135 miles northeast and in the wrong direction 2 days before the big storm (forecasted wind gusts up to 40 knots) to take shelter at Cat Island.  From there, Daubie departed us, back to cold Port Townsend, WA, and we hunkered down until the storm passed, feeling sorry for ourselves that it was too cold to swim (70F).  Well to be honest, we did dip in a few times, but we didn’t spend the usual hour upon hour of swimming and snorkeling. 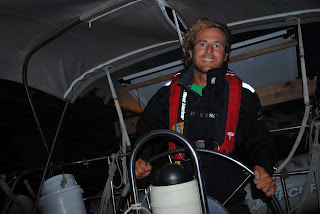 That is neither here nor there; the story I want to tell is our return out to the “Out Islands” – Crooked Island to be exact.
The wind was dying down and Mike and I decided to begin the journey south.  The plan was to head to the west side (the protected side from the ocean) of Long Island near Thompson Bay nearly 50 miles south.  The seas were calm and we were having easy sailing by the time we had made it out to the southern most point of Cat Island – Hawk’s Nest.  We started thinking that maybe we could continue sailing further and make it all the way to Clarence Town – the ocean side of Long Island.  Mistake #1.


The trip to Clarence Town was a great sail (meaning we were making good speed – 6+ knots), but the day was long and ruff.  We traveled 80 miles in 16 hours with seas 6-9 feet, the boat rocking and winds up to 20 knots.  To say the least, it picked us up and spit us out, comfort level a 4 on a scale of 1-10.  We arrived at 7pm, in the dark, and set anchor.  No fish to report – Mike will comment on that later. 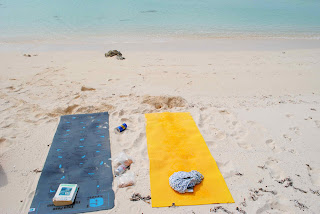 We re-read the charts and noticed the comment “The Little Harbor entrance will be impassable during windy or large swell conditions“.  Needless to say, the swells were large that day and we didn’t want to risk entering the harbor and not being able to leave, so we took a 180-degree turn and headed 30 miles due east – to Crooked Island.
This sail was much smother than the last and we made it to Crooked in 5 hours traveling an average of 6 knots.  The great part about the sail was that we could actually sail comfortably heading due east (sailing this direction is rare because the prevailing wind is out of the east).  We anchored 30 minutes past dusk, in the dark, again.  Exhausted, we crashed out early; tomorrow would be our 6-month anniversary and 3-month mark in the Bahamas.
And we’re back.  Back to Crooked Island after two long, sporadic travel days.  We had not entirely planned to be here, but we are both glad are. 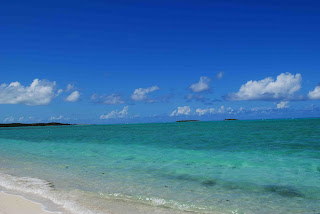 The next morning we went for a jog down the road and ran into two of our friends, Nappy and Trevor, who we met last time we were in town.  They asked us what we were up to and if we wanted to go out to lunch with them across the island.  We eagerly accepted and met them at the docks by 1pm.
Nappy even insisted on buying our lunch.  We rolled through several settlements in a small sedan with one bad wheel, meeting nearly half the island.

We even made a special stop at the Father’s house, as in the pastor of the island.  He was a very interesting man; raised in north Bahamas, track athlete in college, worked on Wall Street for 20-years in bustling New York city to a pastor of a small Anglican church on Crooked Island with a population of 350 people.  Talk about a complete turn around in life.  It was fun meeting him and getting to talk and here his story.

When we made it back to the boat, around 5pm, we had invited Nappy and Trevor to go for a sail.  They were not only enthusiastic about going sailing, but said that it made their dreams come true.


Nappy was a natural at the helm.   We cruised out past the lighthouse and back, Nappy at the helm and Trevor trying it for a bit.  We are certain that next time we come back to the Bahamas, Nappy will be on his own boat!

Posted by Sara Daubenberger at 8:00 AM