“The Old One Returns”
Transcribed for Nellie by Daubie the older 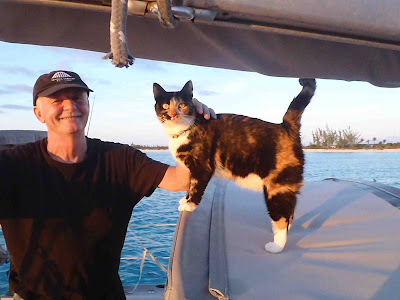 Well a lot has happened since my scribe last documented events.  We have done quite a lot of sailing and none of it very comfortable I might add.
I guess I confessed during my last episode that I have been “making up” with the old one.  It started with some innocent petting.  He is also somewhat nocturnal and I have had fun playing the dodger game with him.  I found that he would play longer with me if I didn’t bite him so hard.  This activity led to the petting, but I have stopped well short of purring.  A girl has her limits. 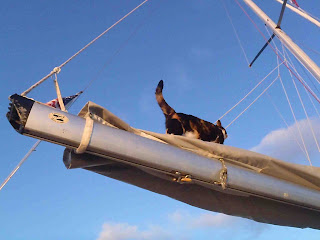 The other good thing he does is feed me.  He always notices when I am lying on the floor staring at my bowl and he seems to know that it means something.  He’s been pretty attentive to my needs and I guess I’ve been appreciating it. 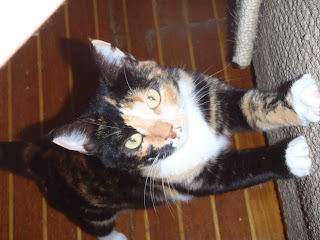 So yesterday we took off from Samana Cay.  I have to tell you, that place isn’t even on the map.  Mom and Dad didn’t even take me ashore there and I’m pretty sure it’s because the locals will eat whatever comes their way.  This one Rastifarian guy kept coming by the boat and I’m pretty sure he thought I’d be good “Souse”, that’s a kind of Bahamian stew.
So anyway, as I was saying, we took off from Samana Cay and all the humans seemed a little tense which always puts me on edge, plus they kept shoving me down below so I was sure something was up.  The next thing I know we’re flying through the air on some giant combers that are breaking on the reefs all around us.  We’re going through a tiny channel and my people are shouting, “ ‘dog leg’ left, ‘dog leg’ right.”  Now not only do I have to worry about breaking waves and getting washed overboard and drowned or castaway on a beach where they turn kitties into “souse”, but it seems like there’s a pack of dogs out there that my people keep dodging.  I was freaked. 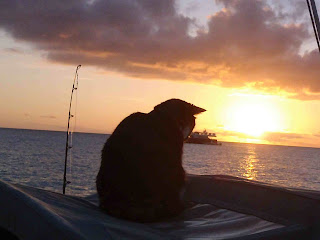 Anyway about sunset we’re still out there climbing watery mountains and surfing down the other side, but I figure it will be over pretty soon cause we always stop at the end of the day and drop the anchor.
Well not this time!  They just forgot to pull over and now it’s dark.  They don’t want me outside and everything in the damn boat is moving around.  Finally the old one comes down below, fills my bowl and lies down on the big bed in the living room.  I like it when they make up the big bed cause I can go underneath it and hang out without being disturbed and attack people’s feet.  So as I was saying, the old one crashed out on the big bed and since I was feeling a little scared and lonely, what with being cooped up all day, I jumped up on the bed and curled up with him.  It was pretty nice he made a little space for me and petted me and I let him. 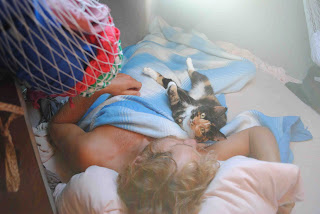 A little later he went outside and Mom and Dad came below and it went on like that all night.  So I just cozied up with whoever was in the big bed.
But I was a little stressed over when it would all end.  Finally about 0900 they dropped that anchor thing on the front of the boat, pardon me the bow and here we are at “Cat Island”.  Now that’s got a promising ring to it.  I think I’m going to like this place. 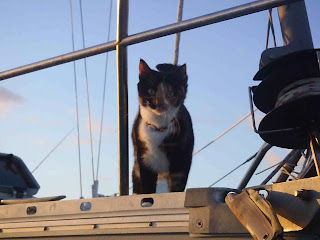 Posted by Sara Daubenberger at 8:00 AM